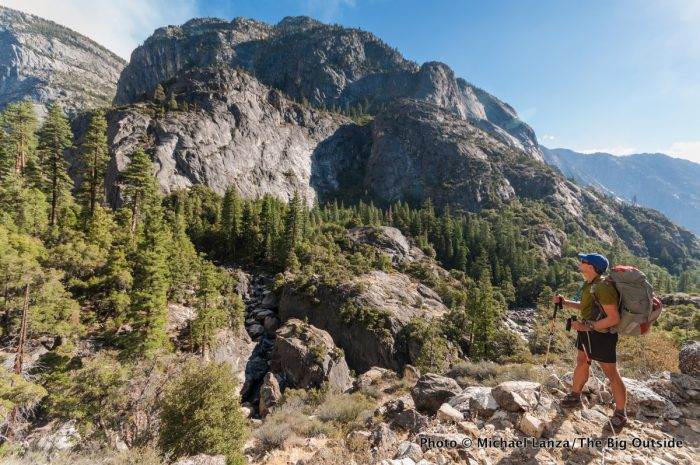 By Michael Lanza In early evening on a bluebird September day, deep in northern Yosemite National Park, my friend Todd Arndt and I—with legs a

In early evening on a bluebird September day, deep in northern Yosemite National Park, my friend Todd Arndt and I—with legs a little weary—reached our fourth pass on a 23-mile day, the second day of a four-day, 87-mile hike. Only a quad-melting, 1,500-foot descent stood between us and soothing our feet in the cool sand and cold water at Benson Lake (possibly the most unbelievable mountain lake I’ve ever seen).

We hiked past quiet tarns where a few backpackers were camped. And it struck me that they were the first people Todd and I had seen all day. That’s not an observation one expects to make in Yosemite. But we were exploring the “other Yosemite”—not the overcrowded park, but its most remote backcountry, on one of the best multi-day hikes I’ve ever taken.

There’s a back story here. After several visits to Yosemite over the past three decades, backpacking, dayhiking, and climbing—some of those to write stories for this blog and Backpacker magazine, where I was Northwest Editor for 10 years—I had become kind of obsessed with the fact that I had still not explored the park’s two most expansive swaths of wilderness: the Clark Range and Merced River headwaters south of Tuolumne Meadows, and even vaster northern Yosemite.

Find your next adventure in your Inbox. Sign up for my FREE email newsletter now.

So I set out to finally fill in that glaring omission in my backpacking résumé, concocting an ambitious plan to make a 152-mile grand tour of Yosemite’s most remote backcountry in one week, divided into two legs, resupplying between them.

First came a three-day, 65-mile loop south of Tuolumne Meadows, including two of Yosemite’s most thrilling summits, Clouds Rest and Half Dome, plus walking through the Clark Range and tagging the highest pass reached by trail in the park, 11,500-foot Red Peak Pass.

That was to be immediately followed by a four-day, nearly 87-mile walk through the biggest and most remote chunk of wilderness on the Yosemite map: a circuit north of Tuolumne Meadows through a vast realm of deep canyons like the Grand Canyon of the Tuolumne River—which is sort of like Yosemite Valley, but twice as long, with most of the people and all of the buildings and cars removed. We crossed passes at over 10,000 feet below peaks rising to over 12,000 feet, and stood atop a peak often described as having the best summit view in Yosemite.

See my story “How to Get a Last-Minute Yosemite Wilderness Permit Now.”

Smoke from wildfires sent three friends and I home after completing the 65-mile hike. So Todd and I returned to Yosemite a year later and knocked off the 87-miler.

Scroll through the photo gallery and watch the videos below and you’ll see why that 152-mile grand tour of Yosemite’s most remote areas ranks among “America’s Top 10 Best Backpacking Trips.” Below the gallery, find links to my feature stories about both of these backpacking trips, videos about each one, and links to my expert e-guides that will help you plan and successfully pull off either trip.

And my Custom Trip Planning page explains how I can help you plan your trip.

I can help you plan a great backpacking trip in Yosemite or any trip you read about at my blog. Find out more here.

See my blog’s feature stories “Best of Yosemite: Backpacking South of Tuolumne Meadows,” about the 65-mile first leg of that grand tour of Yosemite, and “Best of Yosemite: Backpacking Remote Northern Yosemite,” about the 87-mile second leg. Both stories have many photos, videos, and details on planning each hike—in however many days you’d like to take (most backpackers would probably take six to eight days on them). Like most stories at The Big Outside, a paid subscription is required to read these two stories in full, including some basic trip-planning information.

Get full access to my Yosemite stories and ALL stories at The Big Outside, plus a FREE e-guide. Join now!

Yosemite accepts backcountry permit applications 24 weeks (168 days) in advance of the date you want to start backpacking. That means that for starting on a date in mid-July, you should submit your application in late January.

But you can still reserve a backpacking permit for this summer. For each trailhead, 60 percent of available permits can be reserved in advance, while the remaining 40 percent are normally available on a walk-in, first-come basis no earlier than 11 a.m. the day before your hike begins, as long as permits are available.

For summer 2021, Yosemite is issuing walk-in permits through a two-week lottery system; see my story “How to Get a Last-Minute Yosemite Wilderness Permit Now” for details on how to get one.

Want to take either of these amazing trips? My exclusive e-guides tell you everything you need to know (in much deeper detail than the feature stories) to plan and successfully pull off either trip, including multiple hiking itineraries. “The Best Backpacking Trip in Yosemite” describes the 65-mile hike south of Tuolumne and “Backpacking Wild, Uncrowded Northern Yosemite” describes the 87-mile hike north of Tuolumne.

Click here now for my e-guide “The Best Backpacking Trip in Yosemite.”

I’ve also helped many readers plan an unforgettable backpacking trip in Yosemite—including readers planning a last-minute trip without having a permit reservation. See my Custom Trip Planning page to learn how I can help you plan your trip.

See all of my stories about Yosemite National Park, including “The 10 Best Dayhikes in Yosemite,” “The Magic of Hiking to Yosemite’s Waterfalls,” and “Thru-Hiking the John Muir Trail in Seven Days: Amazing Experience, or Certifiably Insane?”

I spent a lot of time writing this story, so if you enjoyed it, please consider giving it a share using one of the buttons at right, and leave a comment or question at the bottom of this story. I’d really appreciate it.