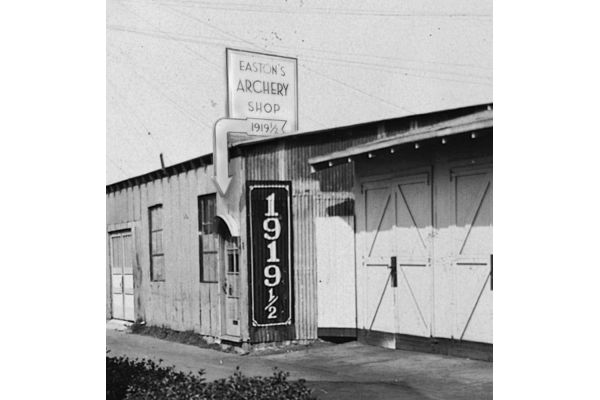 SALT LAKE CITY, UTAH— Founded in 1922 in California, this year marks the 100th anniversary of Easton as an archery equipment manufacturer. Easton’s i SALT LAKE CITY, UTAH— Founded in 1922 in California, this year marks the 100th anniversary of Easton as an archery equipment manufacturer. Easton’s inception began with a young Doug Easton crafting his own wooden longbows and arrows in a garage. By the time he was 17, his craftsmanship was renowned in target archery, and his arrows were regarded as the finest in the country. In 1929, Doug moved to Los Angeles, opening Easton’s Archery Shop, where he would hit the sport full force with a host of wood-arrow innovations including the first screw-in point system. A real pivoting point came in 1949 with the production of the world’s first aluminum arrow, the 24SRT-X. The 24SRT-X shafts were far superior to wood in accuracy. Tournament scores skyrocketed and archery would never be the same.

The small family shop moved and grew. Over the next decade, Doug and team created the venerable XX75, the best-selling arrow shaft of all time. Jim Easton came to work for his dad in 1960, and his engineering mind expanded the company to new altitudes with ski pole shafts, aluminum baseball bats, the use of carbon in hockey sticks, and new frame technology for road and mountain bikes.

Doug Easton was laid to rest in December 1972, but his legacy lived on with his son, Jim, and his grandson, Greg Easton, who would help pioneer virtually every major advancement in arrow technology to this day.  Under Jim and Greg’s leadership, the introduction and evolution of carbon, and aluminum-carbon (A/C & FMJ) hybrids would be the next innovations to dominate bow hunting and sweep Olympic podiums.

The powerful draw of the sport, and the relentless push to innovate are the hallmarks of the company and archery success is what keeps Easton looking down-range, since 1922 and to the next 100 years.

Easton’s archery products continue to be produced in the United States at their facilities in Utah, Indiana, and Iowa. To learn more about Easton arrows, visit: www.eastonarchery.com

Suwanee, Ga. – InVeris Training Solutions (booth #12454) will display its full range of live-fire and virtual training products at the [...]
Overlanding