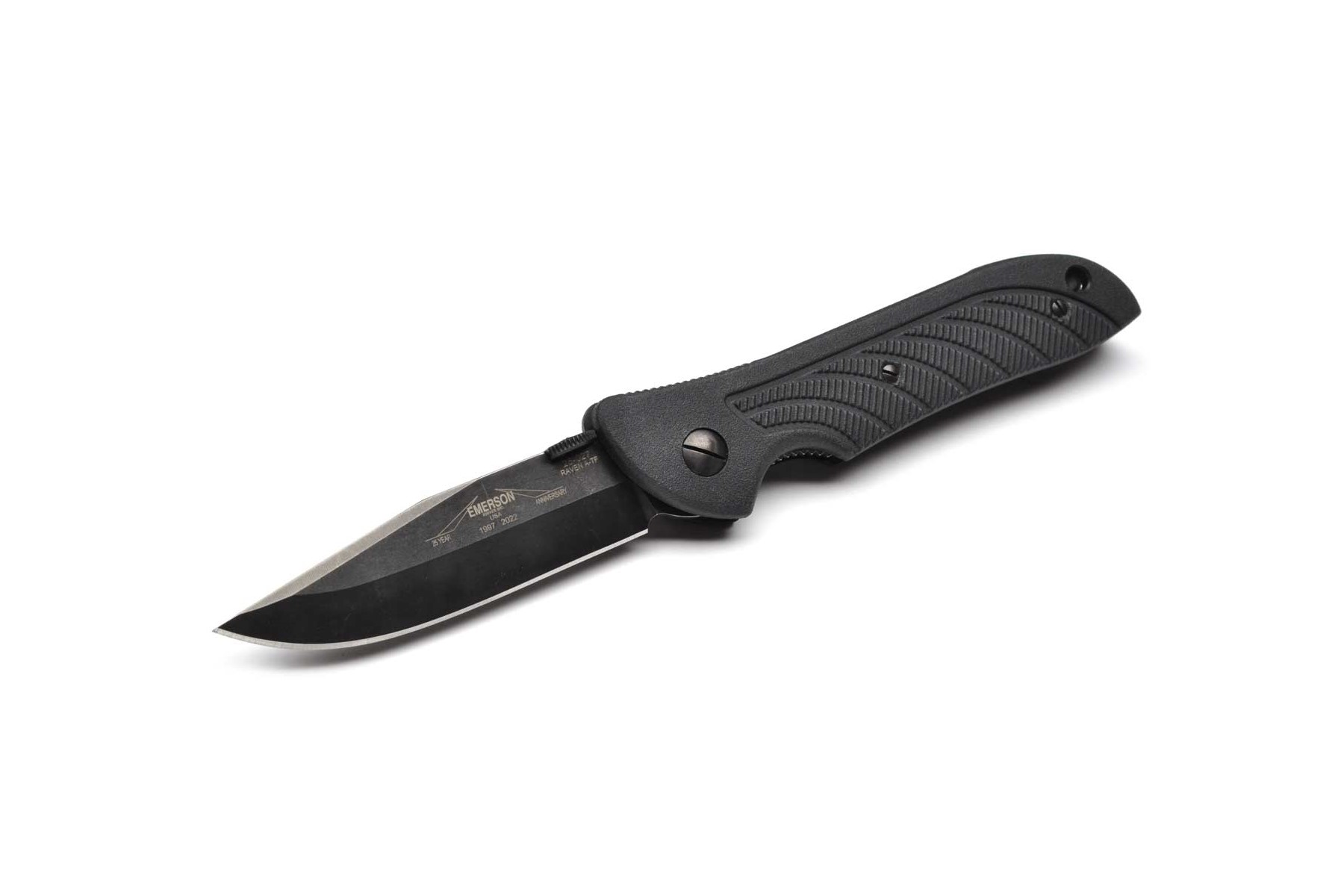 Emerson Knives is celebrating 25 years in the biz with a return to their very first production knives/blades/knives.html" 15179 target="_blank">knife, the Raven. The design is faithfully maintained right down to the handle, which is retro in an unusual, authentic way.

Ernest Emerson himself was making customs well before 1997, but that was the year Emerson Knives, Inc. first came into being. The very first knives/blades/knives.html" 15179 target="_blank">knife that rolled out of the now-legendary shop was not, actually, the famous CQC-7, but the Raven. Even today, everything about the Raven screams Emerson: with a profile that’s a particular mix of tactical and practical, both stylish and rugged, it looks completely of a piece with modern EKI models. It obviously made an impression and inspired many Emerson projects to follow.

This 25th Anniversary Raven be released in limited batches, with FRN handle scales from the EKI vault – as in, genuine, made-in-1997 scales that EKI has kept around, maybe for a special occasion just like this. Sculpted with a pronounced finger groove and big thumb ramp, Raven’s scales also have a feather pattern cut into them to justify its corvine namesake. Underneath the off-side scale is a titanum liner lock – another Emersonian production knives/blades/knives.html" 15179 target="_blank">knife innovation.

Like many EKI designs, the Raven comes in both a drop point and an American tanto blade shape, opened with a thumb disk. The blade length for either configuration is 3.5 inches, and the steel 154CM, just like it was on the ’97 originals. EKI has been playing with some different clip designs lately but they chose to stick to tradition with these 25th Anniversary Ravens, utilizing the wide, robust, classic Emerson clip.

The first run of 25th Anniversary Ravens are at the EKI booth at Blade, Booth #1604, with more to follow later in June.

6 Ways to Get Outside in the Bay Area – Bearfoot Theory

Although San Francisco and the Bay Area may appear tech-focused from the outside, residents know there is no shortage of ways to get outdoors. With [...]
Fishing

Seth Wakefield (left) and the Lee Wakefield with a massive striper caught during the 2020 spring run.One of the best parts of growing up with brothe [...]
Fishing

Pictured: The late Captain Al Anderson began tagging fish for the American Littoral Society in 1967. Over more than 50 years he tagged more than [...]
Copyright 2022 Everest.com. All rights reserved