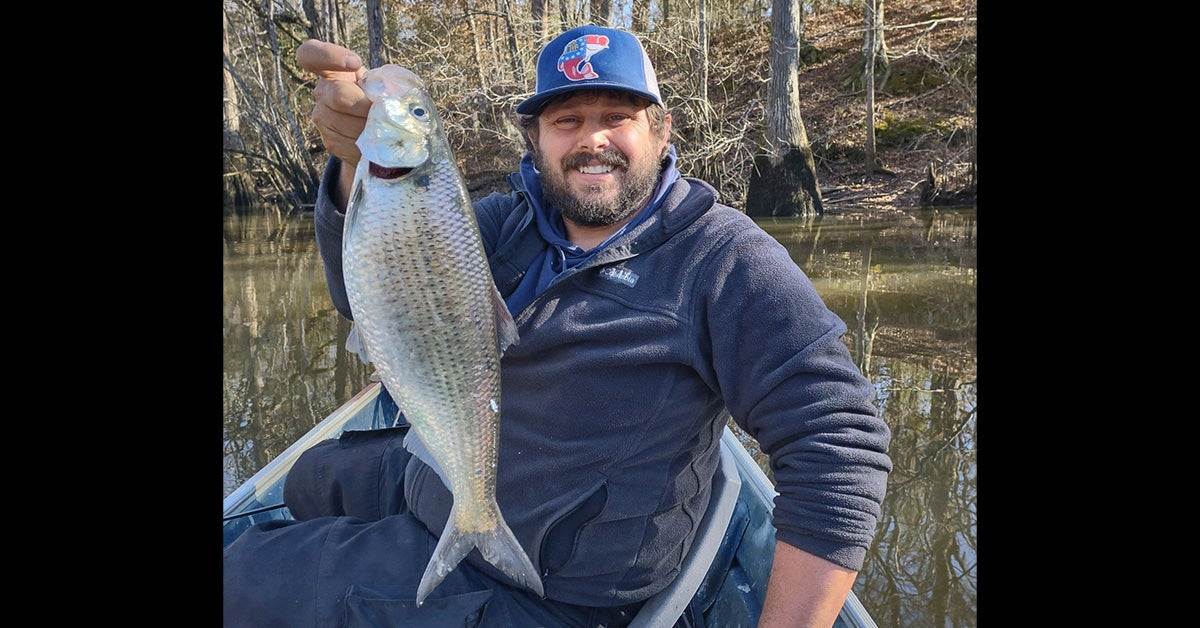 A Georgia fishing record that had stood for a quarter of a century has been broken for the second time in the span of a year. Timmy Wood o

A Georgia fishing record that had stood for a quarter of a century has been broken for the second time in the span of a year. Timmy Wood of Kite, Georgia, caught a state-record hickory shad weighing 2 pounds, 10 ounces on February 20, 2022.

Wood caught the fish on the Ogeechee River—the same waterway that produced a record hickory shad in February 2021. That fish, a 2-pound, 3-ounce shad, was caught by Christian Blake Jones of Swainsboro, Georgia, while he was targeting crappie. Jones’ catch was the first new record for the species in 25 years—and the first hickory shad in the state to top 2 pounds. Now Wood’s fish is the second.

Hickory shad are closely related to the larger American shad, and both are anadromous species that spend most of their life in the Atlantic Ocean. As adults, shad return to the river of their birth to spawn. In Georgia, the spawning run usually kicks off in January in the coastal southern rivers and can last until as late as May below the New Savannah Bluff Lock and Dam near Augusta. Both species are commercially harvested on the Altahama and Savannah rivers, but recreational anglers also like to fish for them as well, particularly on the Ogeechee and Savannah.

“The Ogeechee River is the place to be if you’re targeting record hickory shad,” said Scott Robinson, Chief of Fisheries for the wildlife resources division at the Georgia Department of Natural Resources. “The great news is that there are amazing angling opportunities all over the state and plenty of fish to catch.”

Shad are endemic to the Atlantic Coast from Maine to the St. Johns River in Florida. The small fish were a staple of the American diet during revolutionary times—George Washington and Thomas Jefferson were reportedly big fans of them. Though the fish aren’t as highly-regarded in today’s culinary world, some anglers still enjoy catching and cooking the bony fish.

Shad are also appreciated for packing a powerful punch in a 2-pound package. Once hooked, the hickory shad’s darting, cross-river runs and airborne leaps have even earned them the nickname “poor man’s tarpon” in some quarters.

“Don’t let the species name fool you; there is nothing mediocre about the sporting qualities of this small herring,” writes the International Game Fish Association, which lists the world record as a 2-pound, 14-ounce fish that came out of the Econlockhatchee River in Florida in 2008. “Hickory shad, like their larger cousins the American shad, are spirited fighters on light tackle, and can be fooled by small jigs and flies.”

The Tao of Trout | Hatch Magazine

I remember picking up my phone the other day to dial my friend Todd Tanner in hopes of getting a better idea of what his new fly fishing class is goin [...]

This image was taken from the body cam of the Green Bay officer. Green Bay Police Department / Youtube On May 30, two Gr [...]

The Best Trees and Shrubs for Whitetail Deer

In honor of Earth Month—and Earth Day later this week—we’re celebrating the best way we know how: with a series of stories that are all abou [...]
Copyright 2022 Everest.com. All rights reserved