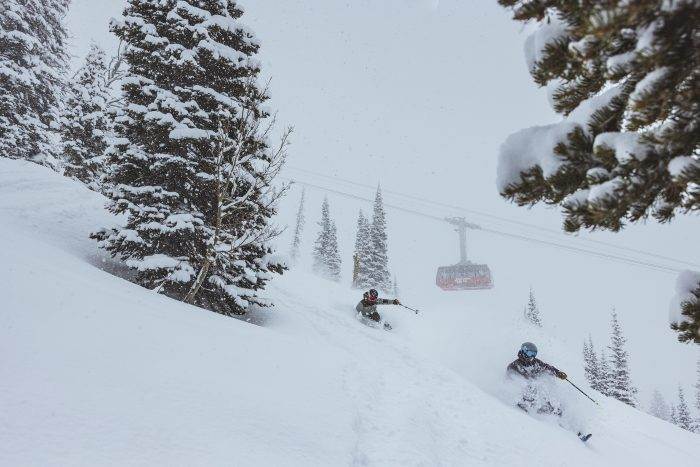 How Jackson Hole’s reservation system has reshaped the skier experience

Featured Image: Stephen Shelesky Earlier this month, FREESKIER brought its annual ski test to one of the world’s most iconic ski d

Some Kids Just Aren’t Meant to Be Hunters
How to Plan an Overnight Kayak Trip to Lake Powell’s Labyrinth Canyon – Bearfoot Theory
The Evolution of Food Plots, Roundup Spraying, and Habitat Management

Earlier this month, FREESKIER brought its annual ski test to one of the world’s most iconic ski destinations; Jackson Hole Mountain Resort. Our gaggle of testers skied from bell to bell each day, with the goal of getting on and evaluating all of next year’s skis to ultimately decide which ones would grace the pages of our annual Buyer’s Guide. We kept our fingers crossed in the weeks prior, hoping that Ullr would bless us with a much-needed refresh and to our delight, he answered our prayers with 20-plus inches of white gold just as testing got underway.

Over the course of four days, it was our mission to test over 300 pairs of skis and efficiency was paramount in achieving that goal. With that in mind, we were a bit nervous that the new snowfall would clog up the lift lines, hamper our efforts and leave testers spending more time evaluating wait times and less time thinking about ski construction. To our surprise, overwhelming lines were never an issue. Albeit, we did have to wait for a few minutes here and there, but it was nothing like the pre-pandemic pile-ups that you may have heard about and certainly nothing like the atrocities we’ve seen come out of places like Vail. So, where did all the lines go?

As with most ski resorts, the lift lines in Jackson have been slowly but surely on the rise over the years and can be mostly attributed to an increase in tourism, year after year. During the 2012-13 season, when JHMR first joined the Mountain Collective, the resort saw a small but noticeable bump that could be linked to the new multi-resort pass but it wasn’t much to write home about. By the time JHMR partnered with Alterra and the IKON pass in 2018, it was clear that wait times had become a major issue and photos of long, snaking lines circulated on social media. To be fair, that was also a banger snow year in the Tetons and data shows that it wasn’t entirely due to the new IKON visitors—but the resort was clearly crowded and locals bemoaned the newest partnership, as well as anybody openly sporting the blue and yellow pass. Skiers were rightfully concerned that this was the new normal at Jackson.

Fast forward a few of years and everything has been flipped upside down thanks to the arrival of COVID-19. Whatever we thought was the norm went straight out the window as individuals and businesses, alike, tried to cope with the radical changes brought on by the pandemic. One major change at JHMR and other resorts was the limiting of daily skiers allowed on the hill in order to ease congestion for safety reasons. Thus, the reservation system was born.

When combined with limited lift capacity, the result was somewhat offset and lift lines remained at an average rate but when lift capacity returned to normal this year and JHMR decided to retain the reservation system, something beautiful happened. The lift lines almost vanished.

By continuing the requirement for Mountain Collective and IKON pass holders to make reservations, and encouraging advanced purchase of regular tickets, it seems the resort has figured out a solution to the overcrowding problem. Die-hard skiers can lap the mountain from open to close, while recreational skiers can leisurely make their way around the hill and pop into any bar or restaurant they please. Everybody wins.

“[The response has been] overwhelmingly positive,” says Buckley. “Our employees have asked us to do this again next year. It’s under control and they get more skiing in when they’re on a break. Todd Jones has said it’s as good as it was in the ‘90s and the IKON pass holders who I’ve talked to think it’s great—but those have been people who planned ahead and made their reservations.”

You may think this is just our opinion but when speaking with locals during our Ski Test, it was confirmed that this is the real-life scenario in Jackson this season. Even during the peak holidays in December, when the resort was pounded by storms, you could walk right onto the tram and ski to your heart’s content. It’s almost too good to be true.

So, if you were thinking about visiting Jackson this year or next—perhaps for the triumphant return of the Rendezvous Festival—and are at all concerned about lift lines, let us assuage your fears. Now is the time, but don’t forget to reserve your days in advance. IKON makes it easy to make reservations through the app while Mountain Collective and daily ticket reservations can be made through JHMR’s online store. Peak days (think weekends and holidays) do sell out and while it’s a bummer when you miss them, it’s in everybody’s best interest to keep this system rolling. Trust us, you’ll be thankful when your legs are quivering from a full day of top-to-bottom tram laps. Adam Scepaniak   04.16.22 We’re rolling into Easter weekend and if you’ve had your fill of Cadbury eggs, we’ve got some deals from our friends at Cod [...]

Field & Stream caught back up with Tina Lewis, proprietor of The Wayward Trading Post, whom we featured in a story earlier this year. Le [...]

The fun of archery can quickly be overshadowed by the pain of the string hitting your forearm every time you shoot an arrow. Sometimes wearin [...]
Copyright 2022 Everest.com. All rights reserved