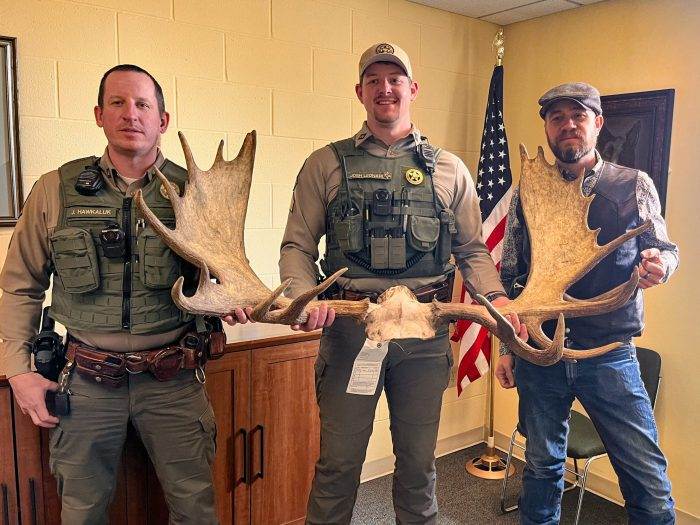 Last week a man from Helena, Montana, received a lifetime ban from hunting and trapping in the state as part of his sentence for illegally

Last week a man from Helena, Montana, received a lifetime ban from hunting and trapping in the state as part of his sentence for illegally killing a trophy moose in 2019. When officials received an anonymous tip in 2020, game wardens were able to link the crime to a suspect.

Shiloh Berry, 41, was sentenced Friday in Broadwater County District Court after he pled guilty to the unlawful possession of a game animal, hunting without a valid license, and waste of a game animal. As part of his punishment, Berry also received a three-year suspension of his fishing privileges, a suspended five-year prison sentence, and $12,100 in fines and restitution, according to a news release from Montana Fish, Wildlife and Parks.

Game wardens with Montana FWP were able to solve the crime with assistance from members of the public, who called into the department’s anonymous tip hotline on two separate occasions in November 2019 and April 2020. The first tip described a headless moose carcass located on Blacktail Road, about 17 miles east of Townsend. Wardens responded to the scene and found the headless carcass, abandoned meat, and distinctive tire tracks and boot prints.

Their investigation could have ended there, were it not for a follow-up tip that FWP received roughly five months later, in April 2020. This time, the tipster mentioned Berry by name and told wardens that Berry was in possession of a set of trophy moose antlers, which he claimed to have found in the same area where the headless moose carcass was originally discovered. Investigators with FWP then procured a search warrant and searched Berry’s home.

In addition to finding the antlers, game wardens also matched a pair of Berry’s boots and the tires on his vehicle to the boot prints and tire tracks that were found at the crime scene in November. Berry then sealed his fate when he confessed to killing the moose in an interview.

The bull moose that Berry poached, and which led to his lifetime hunting and trapping ban, had a rack that was 56 inches wide, along with a Boone and Crockett gross score of 167 and a net score of 145. Montana is one of a handful of states that uses the Boone and Crockett scoring system to determine fines and penalties based on the poached animal’s final score. (Idaho, Iowa, Kansas, Kentucky, Maryland, Montana, Ohio, Pennsylvania, South Dakota, and Texas also use this method.) From the perspective of most hunters, this methodology makes perfect sense: a survey conducted by the Boone and Crockett Club in 2015 found that 88 percent of hunters supported higher fines for poaching trophy big game. The B&C Club enacted its “Poach and Pay” program in 2016, and Montana FWP got involved with the program that same year.

Close to 250,000 steelhead smolts destined for stocking in Washington rivers this spring instead made an early getaway. The juvenile fish [...]

Adam Scepaniak   03.21.22 When it comes to all of our outdoor explorations we want to escape civilization for a weekend or sometimes even an hour. [...]

Back in 2021, Volkswagen secured ownership of the Scout brand—of International Harvester fame—after a merger in which it acquired a trucking comp [...]
Copyright 2022 Everest.com. All rights reserved