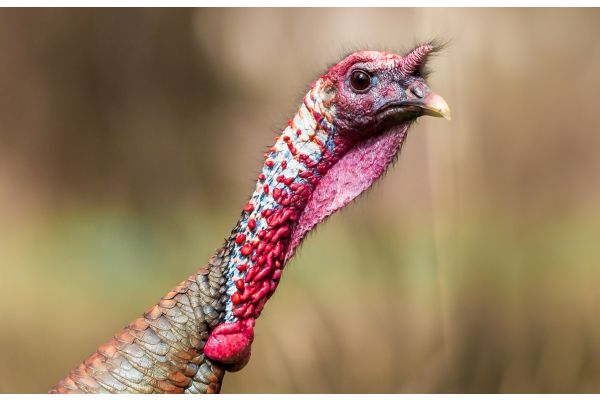 Lymphoproliferative disease virus, or LPDV for short, is well-known amongst researchers and wildlife managers, as it is not uncommon for wild turkeys and various other land-dwelling birds to be infected. LPDV was first documented in a wild turkey in Arkansas in 2009 and has since been detected in wild turkeys in at least 29 states.

Some infected birds form tumors in their internal organs and skin and may exhibit many other side effects, like weakness and lethargy, while some infected birds display no noticeable clinical signs but experience more insidious effects, such as decreased immune system health. Though the disease can be detrimental to individual birds, less is known about its effect on a population level.

“Our primary objective is to determine where and to what extent LPDV is distributed throughout the body of infected wild turkeys, including comparison among turkeys that have no evident disease, those that have mild disease and those that have severe, fatal disease, such as those with multi-organ lymphoid tumors,” said Nicole Nemeth, D.V.M, Ph.D., associate professor at the University of Georgia. “This will be accomplished through the adaptation of an existing, advanced diagnostic tool for LPDV and for a similar, tumor-causing virus that also circulates in wild turkeys, reticuloendotheliosis [REV] virus.”

The team will examine LPDV and other diseases within cells and tissues of wild turkeys and assess patterns of how the diseases spread and how they manifest in a variety of circumstances.

Nemeth and her team will utilize the emerging capabilities of the RNAscope. The technology allows users to examine the distribution and extent of virus components within both diseased and non-diseased tissue at a cellular scale. Researchers will develop this technique specifically for LPDV and REV to not only study single virus infections, but also co-infections with both viruses.

To this point, it has been impossible to distinguish the extent of LPDV and REV infections in cells and tissues, and through the RNAscope’s technology, the team will get a relatively clear picture of how widespread and damage-causing these viruses can be in birds at various stages of infection and disease.

Data attained from the lab findings will be compared to field data from multiple state agencies and will help better gauge the population-level effects of LPDV on wild turkeys and what management strategies could be implemented if needed. For instance, findings could provide a better understanding of how LPDV may affect wild turkeys’ reproductive success.

“We need to answer these basic questions at the cellular level to understand their effects on host fitness and extrapolate to potential population-level effects,” Nemeth said. “This information is crucial to understanding mortality investigations and field study findings, such as reduced fecundity in ongoing and future LPDV and REV studies. This research will fuel future studies aimed at the overall goal of wild turkey conservation and management given the importance of turkeys as a gamebird.”

This project is one of seven new research projects the NWTF is funding, part of a $360,000 investment into wild turkey research the NWTF unveiled at the 12th National Wild Turkey Symposium in 2022.

If you do much camping in California (and likely more states very soon) get ready to say goodbye to the ubiquitous little green propane cylinders [...]
Adventure

Forty-two years ago a magnitude 5.2 earthquake dislodged a rock cap that had been holding back an enormous burp of gas and magma inside Mount St. [...]
Copyright 2022 Everest.com. All rights reserved