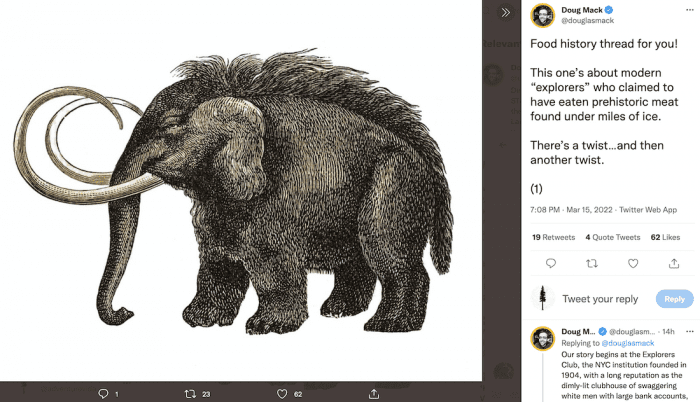 In 1951, members of the much venerated, celebrated, ballyhooed, and, in more recent years

In 1951, members of the much venerated, celebrated, ballyhooed, and, in more recent years, viewed with a much more critical eye, New York Explorer’s Club, hosted a dinner during which they claimed to serve prehistoric mammoth meat recovered from below a glacier.

A man named Doug Mack, who runs an excellent Twitter page and a newsletter in which he writes about the history of food, recently investigated this dinner and what he found was both not surprising and appalling. It also makes for fascinating reading.

Food history thread for you!

This one’s about modern “explorers” who claimed to have eaten prehistoric meat found under miles of ice.

There’s a twist…and then another twist.

An Ode to Roy Underhill, the Bob Ross of Woodworking

Josh Centers   03.31.22 When most people reminisce about classic PBS how-to shows, they usually think of Bob Ross or maybe Julia Child, but one of th [...]
Adventure

How to Wash Your Backpack In, Oh, 7 Easy Steps

We’re enjoying(?) an early spring here out West, and beginning to take stock of our warm weather gear, seeing what needs mending, washing, or c [...]
Copyright 2022 Everest.com. All rights reserved