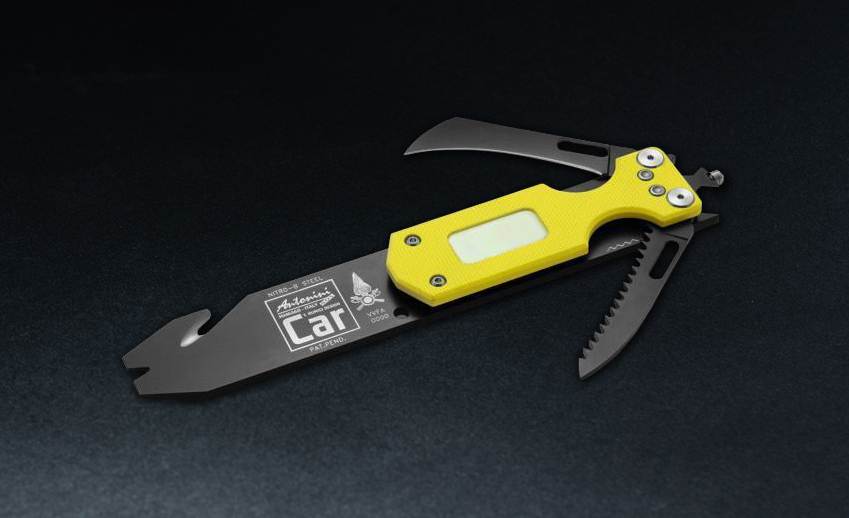 IWA Outdoor Classics 2022 kicks off today in Nuremburg, Germany. Like pretty much every other major show, IWA is making its return after a two year COVID hiatus. As always, IWA will provide a showcase for new blades from companies around world, and one early standout is the latest design from Italy’s Tommaso Rumici, who has teamed up with Antonini Knives for the CAR, a prybar-based multitool for firefighters.

Antonini does make ‘regular’ folding knives, but a large part of their catalogue is devoted to specialized knives for various professional applications. “CAR” is an acronym, and it stands for Car Accident Rescue, which tells you a lot about the role this tool was designed to play. Our default image of a firefighter might be of someone who rushes into burning buildings, but firefighters also deal with dangerous car accidents, and Rumici heard recurring requests from these professionals for a tool built for vehicular rescues; the CAR is his attempt to fill that need.

We’ve seen pliers-based multitools and knife-based multitools; the CAR might be the first prybar-based multitool, and certainly the first in the category we’ve covered on this site. The main tool is a thick, sturdy prybar with a seatbelt cutter and nail lifter built into it. On the other end we see a whole other suite of secondary tools. There are two blades, each measuring 3.15 inches but with very different applications. There’s a hawkbill blade for cutting through car upholstery, and a serrated saw designed to chew threw safety glass. Both blades secure into place with a button lock and, like the most of the other implements, are made from Nitro-B steel, a nitrogen-enhanced European recipe that is durable and highly stain resistant.

Between the two blades there’s a glass breaker, which is itself flanked by 10 and 13mm wrenches. There’s a ruler on the off-side body piece, which is made entirely from steel while show side has a yellow G-10 scale; Rumici included a glow in the dark strip on each side as well. Designed for carry in a firefighter jacket, the CAR comes with a wire clip and weighs 9.88 oz.

The CAR is slated for release later this year.

By Michael Lanza One of the most immutable truisms about hiking is this: Backpackers, dayhikers, climbers, mountain runners, and others who st [...]

Mounting Options for a 96 Bronco

Randy Childers, general manager, feels he is able to build a strong connection with students through fishing, while gaining the benefits of dedicate [...]
Copyright 2022 Everest.com. All rights reserved