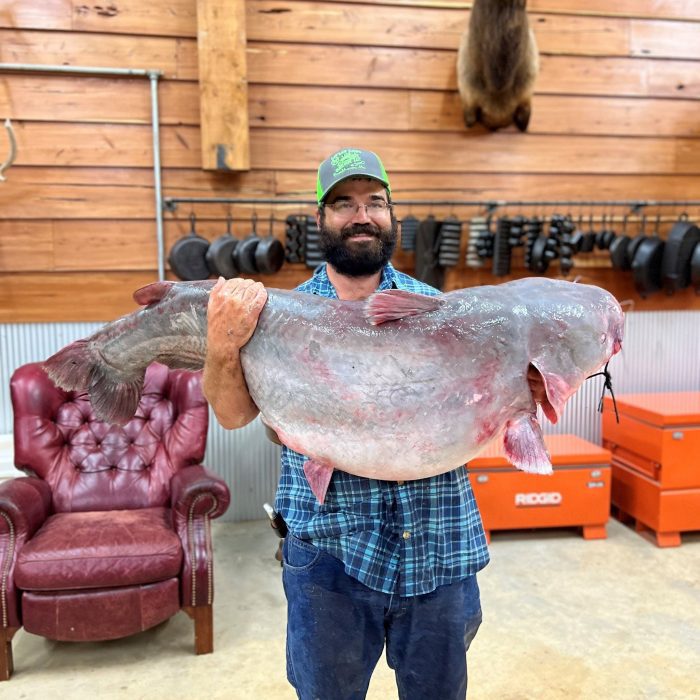 Another record-breaking Blue Catfish has been caught this year in Natchez, Mississippi. This Blue Catfish was caught by Christopher Halley of Brookh The first record Blue Catfish that was caught this year was caught in April by Eugene Cronley of Brandon, Mississippi. This fish was caught on April 7, 2022 on a rod and reel. Mr. Cronley said that it took him forty minutes to land the huge fish. This fish was confirmed as the State Record Blue Catfish in the Rod and Reel category by the Mississippi Department of Wildlife, Fisheries, and Parks. You can see our previous article on that record catch here.

State fishing records for Mississippi are separated into three different categories: Rod and Reel, Trophy, and Fly Fishing. As the name implies Rod and Reel is for fish caught on rod and reel. Fly Fishing records are also as the name implies for fish caught on fly and fly tackle. And the final category of Trophy is for any fish caught on any legal methods other than rod and reel such as trotlines, limblines, and throwlines. To see a list of current state record fish visit: https://www.mdwfp.com/apps/fishrecord/. The Blue Catfish (Ictalurus furcatus) is possibly the largest species of catfish in North America. The other species that could possibly be the larger is the Flathead Catfish. Blue cats are capable of living for up to 25 years and growing over 5 feet in length as well as over 100 pounds, but the average is closer to 2ft long. Specimens like the ones Mr. Halley and Mr. Conley caught are very rare catches.

Knife maker TJ Schwarz is bringing his business to the nex [...]
Adventure

The campground you choose—even the campsite—has the potential to make or break your car camping experience. If you’re a novice camper, her [...]
Fishing

A strike at the surface is one of the most exciting moments in fishing. This is so true in fly-fishing that some anglers won’t fish with any [...]
Copyright 2022 Everest.com. All rights reserved