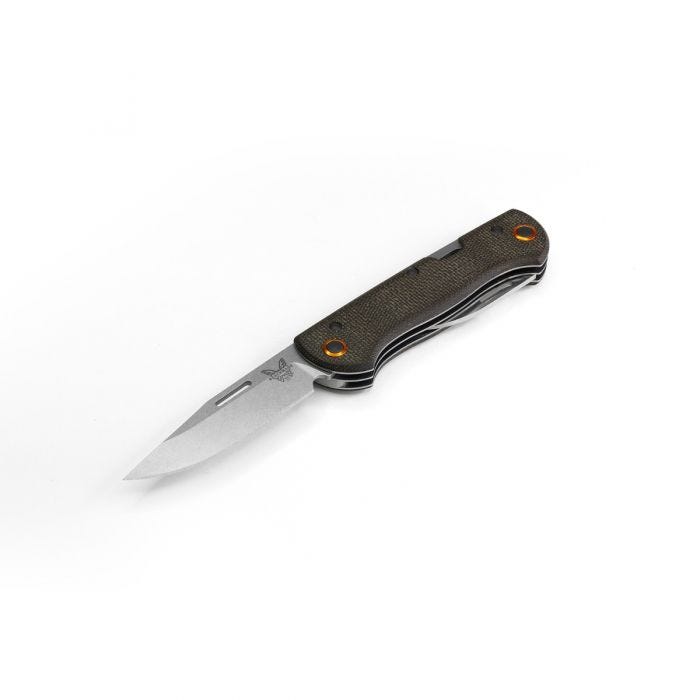 The Benchmade 2022 catalog is here, with a slew of fresh f

Shade your eyes in style with Rigby’s new sunglasses
RMEF Shells Out $180,000 To Aid Elk Migration Research
Best Ways to Carry OTC Medications in the Field The Benchmade 2022 catalog is here, with a slew of fresh folders and fixed blades models scheduled for release this year. While not the biggest batch Benchmade has ever put out, there is quite a bit of variety here, with the hunting/outdoors segment seeing lots of love in particular.

Benchmade returns to the modern slipjoint genre this year with the Weekender. But whereas its previous efforts in this arena, the Proper models, were single blade affairs, the Weekender packs in two blades: a main 2.97-inch clip point and, on the other end, a 1.97-inch backup spear point. Also on the back end is a bottle opening arm. The Weekender comes in either gray G-10 or green Micarta; neither version has a clip.

Automatic knives have always been a core part of Benchmade’s lineup, perhaps more than with any of the other big manufacturers. Their latest in the genre is the Shootout, which is designed to be a more affordable counterpart to some of their previous OTFs (although it still stickers at $300). The Shootout has a spine-riding slide button and a 3.51-inch tanto blade made from CPM-CruWear steel.

This one is billed as a “workhorse Black Class” knives/blades/knives.html" 15179 target="_blank">knife, and certainly seems spec’d to fill that role. The Redoubt has a nice big 3.5-inch drop point blade, made from D2 steel, opened with thumb studs, and secured by an Axis Lock. Its handle scales are made from Grivory and it has a deep carry pocket clip, making this one of the more affordable and EDCable Black Class blades we’ve seen recently.

The Taggedout looks like a cross between the Bugout and the Crooked River. It has the lightweight Grivory construction of the former (and weighs just 2.1 oz.), and the low-slung clip point and arching handle profile of the latter. This one comes with CPM-154 steel and Benchmade’s premium SelectEdge grind.

The Claymore, originally launched last year, is getting a low-key but important line expansion this year in the form of a plain edge model. Other than the rejiggered edge everything is the same here, right down to the two color options of OD green or black.

No surprise here: the 945 Mini Osborne was an immediate smash hit for Benchmade, so it was only a matter of time before they gave it the Gold Class treatment. This version has Arctic Storm scales from Fat Carbon and a Damasteel blade in their Aegir pattern.

There are three new fixed blades from Benchmade, and among them the Anonimus is definitely the Papa Bear. Like many of its stablemates it has a wide drop point blade, that here measures 5 inches in length. Its blade steel is CruWear, so this one is clearly ready for lots of hard outdoors work. The scalloped green G-10 scales cover the full tang construction, and it has a designated portion of the blade for striking ferro rods.

The Raghorn is made for hunters: that’s clear from the spine jimping, the 4.64-inch drop point blade shape, and the bright orange Cerakote. This being Benchmade, however, they’ve also graced the design with some fine materials: fully contoured carbon fiber scales and CruWear blade steel.

On the opposite end of the fixed blade size spectrum is the Flyway. This little guy has a bird-and-trout style drop point that measures just 2.7 inches long. Made from CPM-154 stainless, it should hold up better around watery conditions than its CruWear cousins. It also has a nice roomy handle and some spine jimping for precise control.

The Meatcrafter is getting its third variation this year, albeit a fairly minor one. The S45VN blade here comes with the same hi viz orange Cerakote as the Flyway and Raghorn, and, like the latter, it also has full carbon fiber scales.

By Michael Lanza The best-known dayhikes in America’s national parks are certainly worth adding to your outdoor-adventure CV. Summits and hiki [...]

The Ferrari of Chairlifts

Hanazono Niseko, on Japan’s Hokkaido Island, is a powder-blessed wonderland with volcano views, and seemingness endless terrain. It’s a [...]
Hiking

Cold Steel just brought out one of their first big releases for [...]
Copyright 2022 Everest.com. All rights reserved