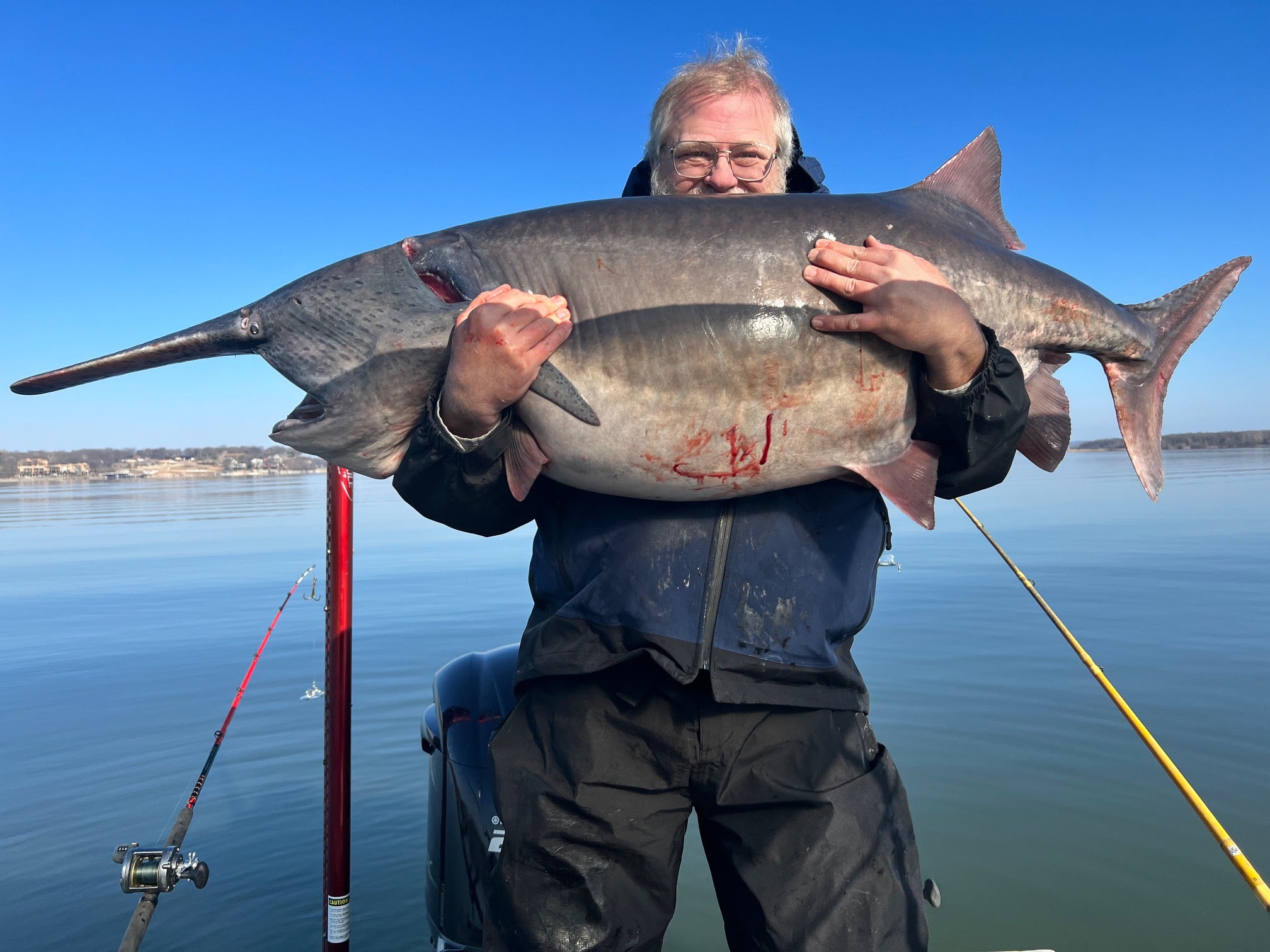 Fisherman Catches One of the Biggest Tripletail Ever
Discovering the Magic of Striped Bass on the Fly
Classic Friday Fly-Fishing Film festival 05.20.22

Late winter spoonbill (paddlefish) season on Grand Lake O’ The Cherokees is often a slower time for guide Rusty Pritchard as the prehistoric-looking fish begin to move out of predictable waters to make lengthy spawning runs. This year, though, Pritchard is slamming late-season “landmines,” his nickname for paddlefish that push 100 pounds or more. His latest trophy was a 102-pounder cranked in by Arkansan John Moore on March 9.

Paddlefish are unique creatures—older than dinosaurs and filter feeders that eat zooplankton that flows into their ample, toothless maw. The signature paddle, called a “rostrum” and resembling a spatulate bill from a gamefish, has electroreceptors that help the fish locate food. Related to, but technically not part of the sturgeon family, spoonbills can live up to 50 years and are found in river systems from Montana to Louisiana. In Oklahoma, they are found mainly in the Grand Neosho and Arkansas river systems.

With no teeth nor instincts to hit a lure or bait, paddlefish are caught by snagging. Pritchard, a guide for 25 years, has collected three Grand Lake paddlefish records—the largest being a 110.8-pounder in 2013. He caught a 107-pounder last year.

“We developed a deep-water trolling technique more than 20 years ago,” Pritchard tells F&S. “We use Dreamweaver divers (similar to Dipsy Divers) to get the 12/0 treble hook down to where we’re marking the fish. In the winter, most fish will be in the main river channel. We find a big school, get our divers down and then the rest of it is mostly luck. The 102-pounder came out of 80 feet of water.”

Luck, yes, in terms of what size fish you happen to hook into. Skilled boat control is also essential since the big fish like to “ride the ledges” along the channel, Pritchard adds.

Pritchard rigs 7- to 8-foot medium-heavy action rods with Shimano Tekota 700 reels spooled with 80-pound PowerPro braided line. He trolls at 4.5 to 5 mph with the reel clickers on. “There’s a fine line between not fast enough and too fast,” he says. The speed needs to be enough to set the hooks, which are positioned a couple feet above the Dreamweavers.

“This is the latest in the year that we’ve ever caught a 100-pounder,” Pritchard says. “November 1 to March is usually the best window for a big one.”

Despite their bigger size, the 80-pound-and-up fish Pritchard calls the giants of the lake aren’t the toughest fighters. “They’re pretty sluggish in the wintertime,” he says. “It’s the 30-pound males that pull the hardest.” He adds that the latest big fish was a sterile male.

“They have no energy to go upriver to spawn,” Pritchard says. “They just lay around in the channel and get fat. That’s why we call them ‘landmines.’ You hit one every so often.”

Grand Lake is one of the few lakes in the country where paddlefish freely spawn. Many paddlefish elsewhere, though, are stocked. Oklahoma’s Tishomingo National Fish Hatchery in Oklahoma raises paddlefish and turtles. Grand Lake’s paddlefish have been the subject of research since 2008, with more than 22,000 fish examined. Besides collecting data via traditional fisheries biologist methods, the Paddlefish Research Center (PRC), formally known as the Paddlefish Research and Processing Center, works with anglers to collect fish.

Anglers who donate their fish—which must be alive when transferred—to the PRC get their fish cleaned and bagged for free. Nearly two-thirds of the lakes anglers who kept paddlefish had them processed by the PRC. Paddlefish are prized for their eggs, sometimes called “black caviar,” and can fetch $20-plus per ounce. If the donated fish has eggs, they are removed and professionally processed into caviar that is often sold in Europe and Japan. Proceeds are used to fund paddlefish management.

Sentinel HubThis is one of my favorite tools for planning shoulder season trips when I want to check current snow coverage. The resolution is high eno [...]
conservation

Legislators in Colorado introduced a bill on Wednesday, Jan. 12, that would ban all recreational hunting and trapping of bobcats, mount [...]
Expert Advice

Mayflies Across America: The Adirondacks

Mayfly hatches bring Adirondack trout to the surface throughout the year. Mayflies are a crucial food source for a wide variety of fisheries, o [...]
Copyright 2022 Everest.com. All rights reserved