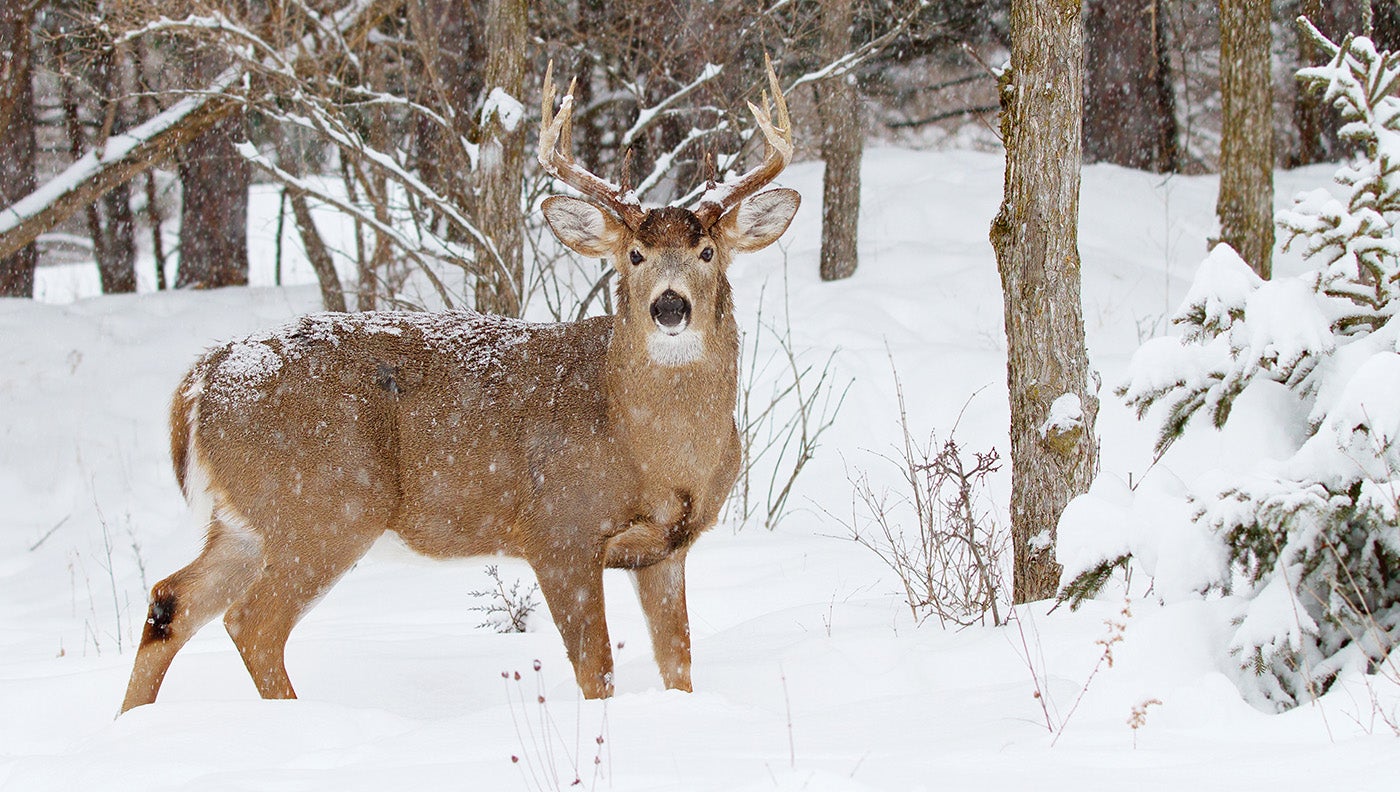 How to Hunt Giant Bucks in the Coldest Weather

Call me crazy, but I absolutely love this part of the deer season. When the snow flies and the bitter cold that my home state of Minnes

Call me crazy, but I absolutely love this part of the deer season. When the snow flies and the bitter cold that my home state of Minnesota is known for settles in, I know that if I do my part, I’m going to see as many, if not more, big bucks than I did during all the weeks leading up to this point. Mature bucks are so serious about replenishing energy now that they literally flock to the best food sources. So, I’m confident that I’ll lay eyes on any bruisers that have been calling my hunting areas home, and, if the food is good enough, I’ll stand a good chance of seeing a giant that hasn’t stepped foot on my property in months, if ever.

The Key to Daylight Winter Buck Activity is Cold Weather

The caveat is that it has to be cold—really cold. Those big bucks are savvy enough to begin with, but after the best part of an entire season’s worth of pressure, they’re on pins and needles. But if the mercury drops low enough, it’s like they have not choice but to get up and feed during daylight. They may wait until shooting light is almost gone before stepping out into an afternoon plot or field, but they can certainly surprise you and pop out long before dusk. More surprisingly, though, is how long they’ll stay on their feet in the morning, hitting the best feeding areas as they slowly make their way back to bed. Or getting up from a morning bed to go feed for a little while. I think most hunters miss this action because they are so focused on evening hunts at food sources this time of year. But my trail cameras don’t lie, and every year, again and again, I get pictures of good bucks hitting my best plots at 7, 8, even 10 in the morning.

I used to pretty much always skip the morning hunt during the late season (like a lot of hunters), until I realized I was missing the boat. One of my favorite bitter-weather strategies now is to wait for pink light, when it’s just bright enough to glass an ag field or plot from a distance in the early morning. If the field is empty or I feel I can avoid deer, I’ll scurry into one of my best feeding-area setups and put in a few hours. Obviously, you have to be careful about sliding into a stand now, but this is late season; you have to be careful all the time! If deer are already on the food when I’m glassing and I feel like I can’t avoid bumping them, I’ll just try another day or another area. But it’s surprising how many stands I’ve saved for afternoon hunts that are just as productive in the morning.

Set Up to Shoot a Staging Area in the Evening

When it does come time for the evening hunt, you can definitely score now by simply sitting in a stand or blind overlooking a good late-season plot or ag field. That said, don’t be surprised if the oldest bucks only show in those last few minutes of shooting light. And if it’s now quite bitter-cold enough, they may hang back just inside the woods until full dark.

That’s why I’ll often set up in a staging area just off the feed now, or at least in a field-edge stand that has good shooting into a staging area. With some secondary breeding still going on around the hottest food sources, late-season staging areas will often have fresh rubs and scrapes. Don’t expect the sign to blow you away now; a small scrape or wimpy rub might be the only clue you get, but these subtle hints can tip you off to where a buck lingers before committing to food. If you have snow, finding a buck’s approach to a food source should be easy. One note of caution: Don’t dive too deeply into the woods to find a winter staging spot, as post-rut bucks tend to bed close to the food. Tip-toe along the edge to avoid bumping deer, hang a set or use a climber if you don’t already have a stand there, and make sure you have a favorable wind and good cover. You’ll likely have multiple eyes, ears, and noses to fool before the big one arrives.

One of the most overlooked appeals of this time frame is the solitude. If the cold weather and snow isn’t enough to deter most hunters, pure exhaustion from going at it since September has weeded out a lot of the competition (not to mention the fact that a lot of hunters are tagged out). I’ve even hunted popular public areas this time of year and rarely encountered a soul. There’s just me, maybe a hunting buddy, and a bunch of hungry deer. I know it’ll be a cold sit, but I also know that it may make my whole season.

How to Get a Permit to Backpack Rainier’s Wonderland Trail

The Deer Wagon: I Traded My Silverado for a Subaru

There’s an old joke about people confessing their sins out loud in church, where the preacher encourages the congregation to “Tell it all, b [...]
Camping

Most of us probably have an old cooler lying around somewhere. It’s likely been collecting dust and maybe we’ve invested in a new one. Th [...]
Copyright 2022 Everest.com. All rights reserved