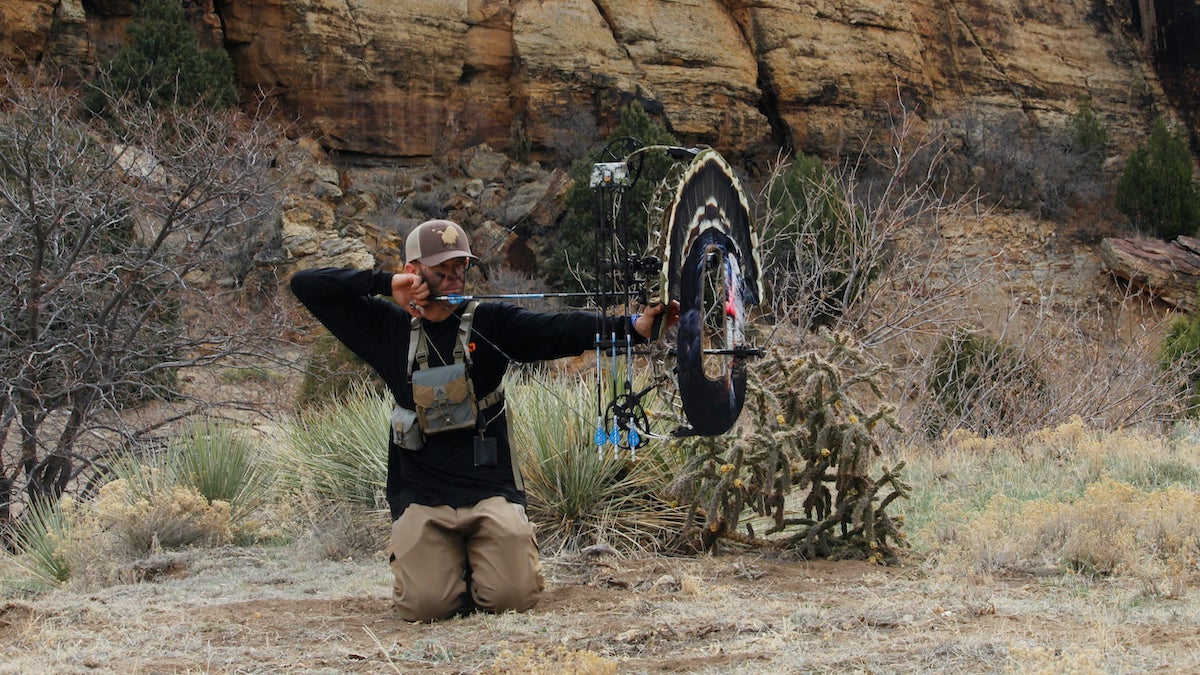 My morning roost hunt was a bust. The bossiest girl in the flock cut and yelped as she made her way up the canyon away from my ground blin

My morning roost hunt was a bust. The bossiest girl in the flock cut and yelped as she made her way up the canyon away from my ground blind set, taking a trio of toms with her. Getting back on those birds in open terrain was going to be next to impossible, so I decided to try something different.

I pulled a cloth decoy from my pack and attached it to my bow with Velcro straps—transforming my vertical rig into a full strut tom decoy. Then I made my way to a large sage bush 150 yards away from the flock. The boys were puffed up, and the girls were scratching and pecking at dried cow pies in an open stretch of a grazed-to-the-bone pasture. I moved my bow out from behind the bush and yelped loudly.

The response was instant. Two of the three toms dropped strut and came toward me at full tilt. I was so caught off guard, by the time they were inside of 20 yards, I didn’t see four more jakes standing 4 yards from me. The jakes got behind me and spooked, taking the two toms away with them. But the third tom back at the flock was ready to fight, and he came charging.

When the hinge on my release went off, the bird was still running toward my bow-mounted decoy. He was so close that when the arrow hit him, he kicked dirt up on my pant legs.

How to Hunt With a Bow-Mounted Reaping Decoy

Reaping is nothing new, but most turkey reapers tote a shotgun. Taking birds outside a blind behind a bow-mounted fake is a tad more complicated. When hunting with a shotgun and a longbeard hangs up at 50 yards, you can shoot him. When a bow is in your hand, you’ll need to get the bird inside 20 yards. Bow-mounted reaping doesn’t work every time, and it can get chaotic in a hurry, but that’s the beauty of it. If you’re ready to get out of the blind and kill birds with your stick-and-string at ridiculously close distances, there is no better way.

The Best Decoy Setup For Reaping Turkeys With a Bow

My bow-mounted reaping decoy of choice is Ultimate Predator Gear’s MerRio Turkey Decoy. (The company also makes an Eastern Turkey fake.) The decoy comes with Velcro straps for attaching it to your bow, but I highly recommend purchasing the Spider Straps, which are easier to use and much quieter. Wrap the straps around your bow’s riser at the top and bottom, where the riser and limbs join, and you’re set to go. When not in use, the decoy folds to fit perfectly in your pack or turkey vest.

I also recommend a Kwik Stand bow system from Pine Ridge Archery, or some kind of stabilizer system with screw-in or deployable legs to keep your bow propped up. Without a stand, your bow will always have to be in your hands which makes it hard to use optics or a hand-operated turkey call. And when you find yourself hunching behind a bit of cover and the birds are off in the distance, it sure is nice to be able to set the bow down.

I’d never practiced with this decoy or attached it to my bow before using it in the field. Don’t be me. If that tom hadn’t been so close, I’m not sure my arrow would have made contact. The decoy adds only a tiny amount of weight to your bow, but it acts like a sail in the wind. I recommend practicing with it attached to your bow regularly. You’ll also want to get a feel for attaching it to your bow quickly, and be sure your attachment points put your sight and stabilizer through the vertical shooting window.

How To Reap Turkeys With a Bow

As far as the how-to behind turkey reaping, it’s not rocket science. You are the decoy, and you want male birds to see you. I have the best luck when I get inside 150 yards of birds I can see. Another excellent tactic, especially if you’re hunting a single tom or a few toms traveling together, is to set up in front of their direction of travel and start calling. Either way, use any available cover to help disguise the decoy, showing only bits and pieces of it to the birds and letting the cover break it up.

If a bird is coming toward you, pay attention to his body language. If he breaks into a run, get ready to get the bow back and cut an arrow loose. This happens a lot, especially if more than one tom is coming toward the decoy. If a bird is walking slow and steady, blowing up into strut as he makes his way, stay still and ready. As long as the bird keeps going into strut, you’re good. If a bird hangs up and starts angling away or stays in one spot for a grip of time, craning his neck trying to get a good look at the situation, move your bow’s riser slightly to simulate some movement. While doing this, let out a few soft yelps on the mouth call.

Over the years, I’ve done a lot of bow reaping and have learned tricks that will help you be even more successful. First, wear a black sweatshirt, coat, or long-sleeve shirt. Turkeys are black as the ace spades, and a black top will make you look like part of the decoy. It’s also a good idea to wear a black facemask or apply face paint.

I’ve taken several bowhunters on their first bow-mounted turkey mission, and more than once, I’ve watched them struggle to draw their bow. You don’t need to be pulling 70 pounds to kill a turkey. Set your bow at a comfortable poundage that allows you to hold the bow out in front of you and pull straight back in one fluid motion. You don’t want to point the riser up or down when you draw.

I’ve taken ninety percent of my bow-mounted turkey shots inside of 10 yards. Getting birds close is why you hunt this way. Don’t get over-excited and feel the need to send an arrow at 30 or 40 yards. When you have a 20-plus-pound, pissed-off bird 3 yards in front of you, and that bird has no idea you’re behind a few millimeters of cloth, the blood gets to pumping. And even though birds can get super close, pick a spot and shoot a sizeable expandable broadhead. I like a cutting diameter of two inches.

This will be the last update for a while, as we have parked up. But we entered Armenia and of course armed with beer, we headed for our first camp ne [...]
conservation 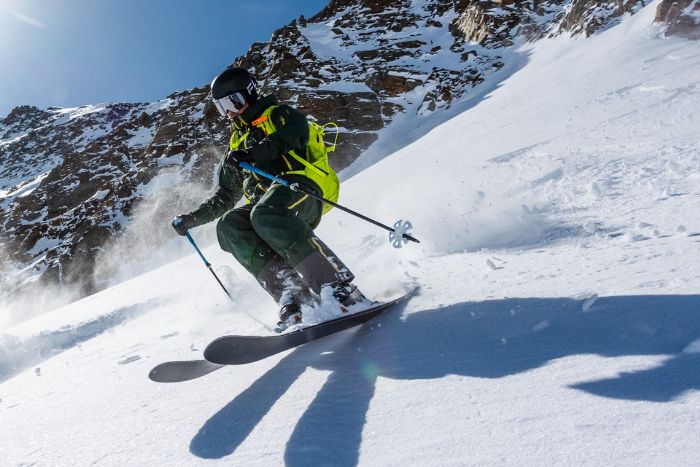