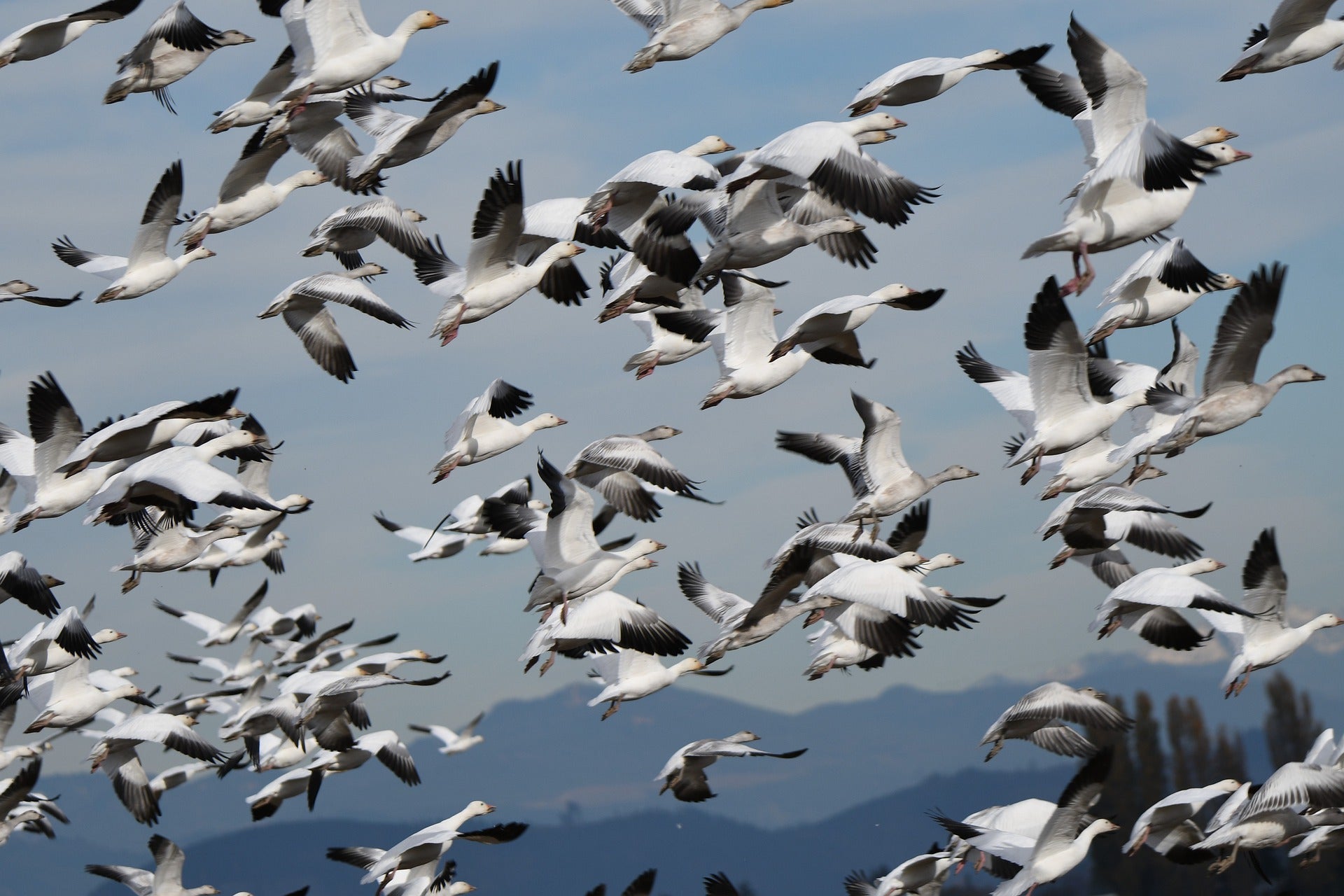 Highly pathogenic avian influenza (HPAI), commonly known as “bird flu,” is raising concerns across the eastern U.S. and southern Canada. New positive test results, in both wild and domestic fowl in different parts of the country, are popping up almost daily. Here’s what you need to know about this rapidly developing situation.

HPAI is comprised of a “variety of influenza viruses that originate and circulate freely in waterfowl on a global basis,” says Bryan Richards, Emerging Disease Coordinator for the National Wildlife Health Center of the U.S. Geological Survey (USGS). The viruses have coevolved with waterfowl, meaning they’ve changed together over the years. So, typically, when a duck carries HPAI, the virus does the duck little or no harm.

But from time to time, these viruses spill over from waterfowl into large-scale domestic poultry production facilities—and then back into wild populations. “Viruses want to change,” explains Richards. “They mutate rapidly, so if you ‘spill’ one of these viruses into a high-density poultry facility, they can sometimes change rapidly into a type of virus that can cause high levels of mortality.”  This year’s HPAI outbreak is notable because it not only kills poultry; it appears to be deadlier to wild fowl than past strains.

Where is the current outbreak of bird flu?

HPAI is a mobile virus because its hosts—waterfowl—are migratory. Wild ducks and geese travel throughout North America, of course, but also from one continent to another.

Snow geese present a clear example of HPAI’s high viral mobility. Outbreaks of HPAI were recorded among snow geese in Kansas—and then in Nebraska, South Dakota, North Dakota, and finally, southern Canada, where three individual cases of HPAI were documented in Quebec.

As of mid-April, the USGS has found HPAI in eight of nine Canadian provinces in wild birds. The virus has been detected in both backyard flocks and commercial poultry operations in all but Saskatchewan, Prince Edward Island (PEI), and New Brunswick.

In the Lower 48, HPAI appears to be concentrated in the northern half of the Central Flyway, likely because of the annual spring migration of millions of snow geese. Cases appear to have also spread east along the southern edge of The Great Lakes and into New England. On the East Coast, cases range from the southern tip of Florida to Maine. The USGS continually updates a map of the disease’s spread on its website.

If wild birds tend to only be carriers, why is the current outbreak killing them?

HPAI has mutated rapidly over the years. Though it rarely kills its original host species—ducks—the virus has morphed so that it does result in some host mortality.  Past HPAI outbreaks among wild bird populations have typically been small and subsided quickly, but the current iteration of the disease appears to have the potential to cause widespread mortality events among waterfowl.  Recently, 5,200 wild cranes in Isreal died of H5N1, a prevalent type of HPAI.

Why Is this HPAI outbreak so concerning?

This year’s HPAI outbreaks among wild birds have resulted in mortality events, with some causing enough concern to prompt the closing of federal wildlife refuges to the general public, such as Loess Bluffs National Wildlife Refuge. While cases of bird-to-human transmission of HPAI are rare, they’re not unheard of. Public officials are likely playing it safe with the closing of public refuges, according to Richards.

Commercial fowl operations are facing severe losses—with the potential for more to come. As of April 6, Iowa, the nation’s leading egg producer and home to more than 46 million chickens, has lost 13 million of the birds, according to the U.S. Department of Agriculture. The American public is already experiencing the financial repercussions at the grocery store, with higher egg and poultry prices.

As wild birds migrate across the nation and internationally, the potential for future large-scale outbreaks on both domestic and wild fowl increases. It’s difficult for scientists to predict the extent of these impacts—but the situation is enough to concern wildlife managers.

What are wildlife management agencies doing to address the outbreak?

Both the USGS and USDA Wildlife Services are partnering with state agencies to monitor the disease, update distribution maps, and educate the general public on how to help slow or contain the spread of HPAI. To track the spread of the disease, the agencies often collect samples from hunter-harvested waterfowl across the nation. “If you’re a waterfowl hunter, you might have been stopped at the boat landing, and representatives would have, and very courteously, asked if they could swab your ducks,” says Richards, noting that the goal of these efforts is primarily to “provide early warning” to the domestic poultry industry. Notably, the sampling program was initiated in the Atlantic and Pacific flyways because they are the closest flyways to which waterfowl from other continents would first appear.

The USGS HPAI distribution map provides a way for all participating federal and state agencies, as well as domestic fowl producers and hunters, to keep track of the whereabouts and potential progression of the virus.

Education and awareness are also important. The Center for Disease Control (CDC) manages a webpage that provides science-based info on HPAI. The USDA Animal and Plant Health Inspection Service has a page that specifically details safety procedures for hunters.

Will the disease impact waterfowl hunting regulations next season?

“My short answer is no,” said Brad Bortner, former chief of the U.S. Fish and Wildlife Service’s (USFWS) Migratory Bird Division. “I expect the virus to dissipate once the birds distribute themselves on the breeding grounds, with the possible exception of snow geese or other colony nesters.” He said. “I don’t expect the need for regulatory changes based on HPAI.”

We are still living in a time of pandemic. It’s gloomy, but it’s our reality. Every day we are practicing resilience, caring for each othe [...]
Fish

Spots for first time near in/near GA to overland : overlanding