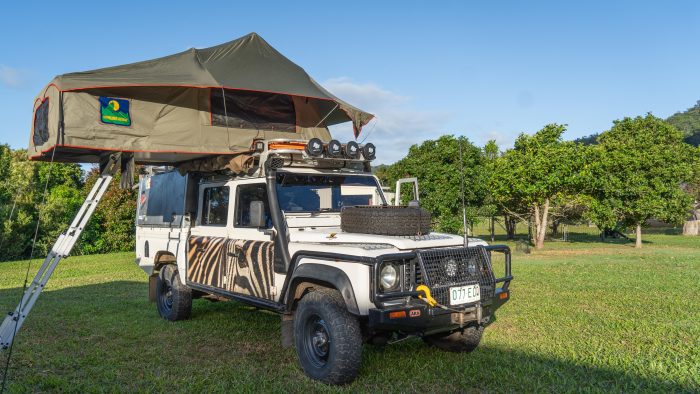 Ruth and Tony spent 2 years driving right around Africa in this iconic 1995 Land Rover Defender 130. Now they’re shipping it back for another two year African adventure (details in comments, inc. how they pay for it) : overlanding

Unbeknownst to me Ruth and Tony drove right around the coastline of Africa at the same time as me, on more-or-less the same route as me, 12 months beh

Unbeknownst to me Ruth and Tony drove right around the coastline of Africa at the same time as me, on more-or-less the same route as me, 12 months behind me. They caught up to me right at the end of the expedition in Egypt, and we camped together for a few nights, including what was the final wild camp of Africa for us all. We waved goodbye and have not seen each other since.

They’ve been living in Australia for the last three years, saving every penny they can, and I caught up with them just two weeks before they’re loading the Defender into a shipping container to ship it back to Africa to go for another two year adventure.

I absolutely love this vehicle, and more importantly the adventures that it enables. Keep it simple and don’t spend money if you don’t have to are priorities here, and these guys work hard to make their dreams of grand adventure come true.

Tony is a diesel mechanic, and Ruth is a beautician, so they are not rich people. They work hard for years and years to save every penny they can, then aim to travel on a budget of around $2000USD/month for the two of them for absolutely all expenses. Like virtually everyone I met driving around Africa, they’re ordinary people who work hard to make their dreams come true and go for it. They don’t have Instagram.

I also love what this says about overlanding in Africa. Many people said I was lucky to make it out alive, or that I must have been in constant fear of my life (which is simply not true). Ruth and Tony are very sensible, well educated people living in one of the safest and most developed countries in the world, and they’re choosing to go to Africa for another two years, after already spending two years there driving through more than 30 countries (including all the notorious ones). That speaks volumes to how they feel about the safety situation, and how much they enjoyed their two years the first time around.

If you’ve ever dreamed about massive adventures, don’t let anyone tell you it’s not possible. It really is.

I also filmed a walk-around video of the vehicle where I go into the specifics of their build out, and talk about the things I’ve said above. https://youtu.be/ULbw20I5Mto

Hells Canyon Through the Eyes of an International Student
Want Your Kids to Love the Outdoors? Put Them In Forest Kindergarten
The 5 Best Tips For Hiking With Young Kids
Adventure 1089 Life 1142 Overlanding 473 Travel 1042

By Michael Lanza Sitting in my inflatable kayak as our flotilla of more than a dozen rafts and kayaks launches on our first morning on Idaho’s [...]
Gear

Hey all, we (LightLeaf Solar) are a solar manufacturer in Canada specializing in custom carbon fibre solar panels. We are looking into developing moun [...]
Copyright 2022 Everest.com. All rights reserved