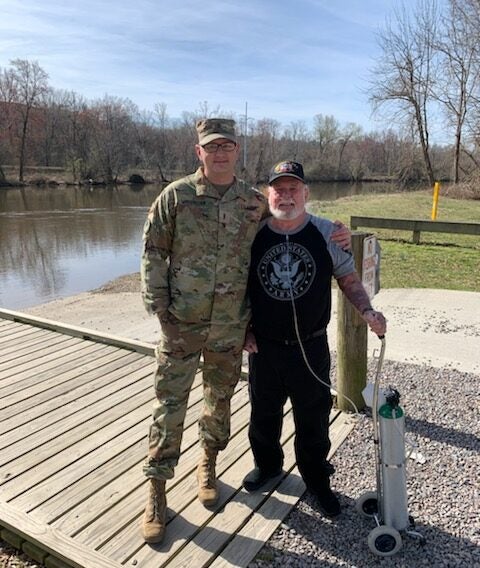 Miserlian, an active member of the U.S. Army, stands beside Goodwin, a 75-year-old Vietnam veteran. Courtesy of Christopher Miserlian

Chief Warrant Officer Christopher Miserlian was fishing from the banks of the Appomattox River last Monday when he heard a cry for help. Looking upstream, he noticed a jon boat anchored in the middle of the river. When, after further investigation, he saw an older man hanging onto the side of it, his instincts kicked in. Miserlian swam out and rescued John Goodwin, a 75-year-old Vietnam veteran, and the two servicemen were able to reunite at the river yesterday.

Miserlian has been an active member of the U.S. Army for 21 years. Stationed at Fort Hood in Central Texas, the ammunitions technician is currently undergoing schooling for advanced ammunition logistics at Fort Lee, an Army training station located just east of Petersburg, Virginia. But when he isn’t in class or working on the base, Miserlian can usually be found at the nearest fishing hole—which is exactly what brought him to Roslyn Landing on the Appomattox River the afternoon of March 7.

He tells Outdoor Life that he wasn’t even planning to go fishing after class that day. He had been on the water all day Sunday, and he was feeling run-down and in need of some rest.

“But after class, when I got to the hotel room, I just went into my normal routine,” Miserlian says. “I changed out of my uniform and grabbed my poles and went fishing. I didn’t even really think about it.”

The soldier says he headed straight for Roslyn Landing, one of his go-to catfishing spots in the area, and was getting ready to toss out a line when he heard a strange sound. Looking upstream, he noticed the small, narrow boat anchored in the middle of the Appomattox with nobody in it.

“I thought that was kind of strange—something just wasn’t right. So I went up to check it out, and when I got closer, I heard ‘help.’ Well, that got me moving faster,” Miserlian explains. “Then I could see an old man just hanging off the side of the boat in the water. So I kicked off my shoes, threw my phone and stuff on the ground, and jumped in the water.”

The next thing Miserlian knew, he was knee deep in mud. After slogging his way to the main channel, where it dropped off to 20 feet or so, he swam to the boat.

“I made sure he was alright and breathing fine, and he just nodded his head,” Miserlian says. “He didn’t say a whole lot. He just looked exhausted. Not scared or anything, there was no fear in his eyes. But I think he was just about ready to let go when I got there.”

Goodwin would later tell Miserlian that he had been halfway submerged in the cold water for at least 30 minutes by that point. He had reached for the anchor rope and fallen straight into the water, and although there were other people around, nobody else at the public park heard or responded to his cries for help.

Miserlian says that because of the boat’s narrow beam, it was difficult to climb aboard, so he pulled himself over the stern of the boat and immediately tried to haul Goodwin over the gunnel. All this movement threatened to capsize the boat, however, so Miserlian told Goodwin to hang on to the side of the boat while he pulled anchor and started the small trolling motor. After briefly fighting the current and a headwind, he headed straight for shore, where an onlooker had already called 911.

Read Next: 7 Hunters Rescued After Being Stranded for a Week on Alaska’s Yukon River

By the time the EMS arrived, both men were extremely cold. Miserlian initially wanted to follow the ambulance to the hospital, but after the adrenaline wore off and he realized how cold he was, he headed back to the hotel to take a hot shower.

Miserlian says that he probably wouldn’t have told anyone at headquarters about the incident, but an off-duty military police officer was at Roslyn’s Landing when the rescue occurred. Since he was stationed at Fort Lee, the off-duty officer told the public affairs coordinator there, who then notified WTVR CBS-6 News in Richmond, and the local news channel arranged for the two men to meet back at Roslyn’s Landing yesterday. But Goodwin, who served in the military for 22 years and did two combat tours in Vietnam, only agreed to come after he learned that his rescuer would be there in person.

“We exchanged phone numbers,” Miserlian says, “so we’re gonna link up again and do some fishing when he feels better. But we’ll be fishing from the bank this time.” 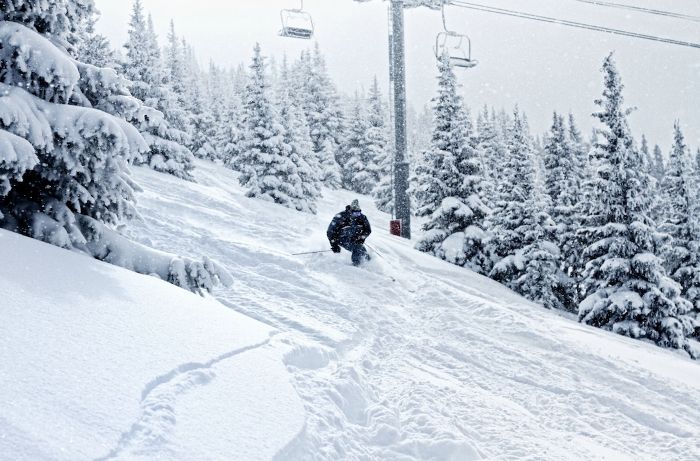 After a Near-Disastrous Winter, Vail Resorts Raising Wages and Opportunities

When Vail Resorts decided to slash prices for their Epic pass by 20%, they 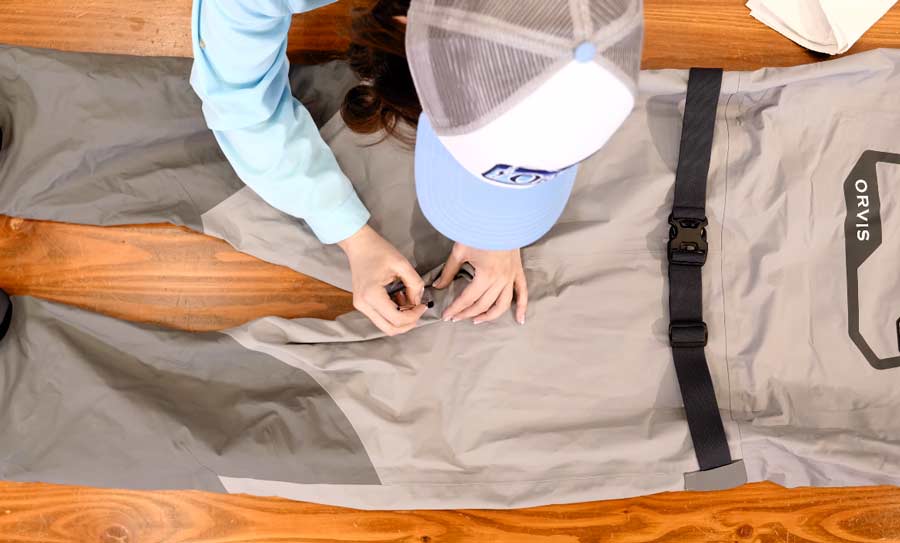 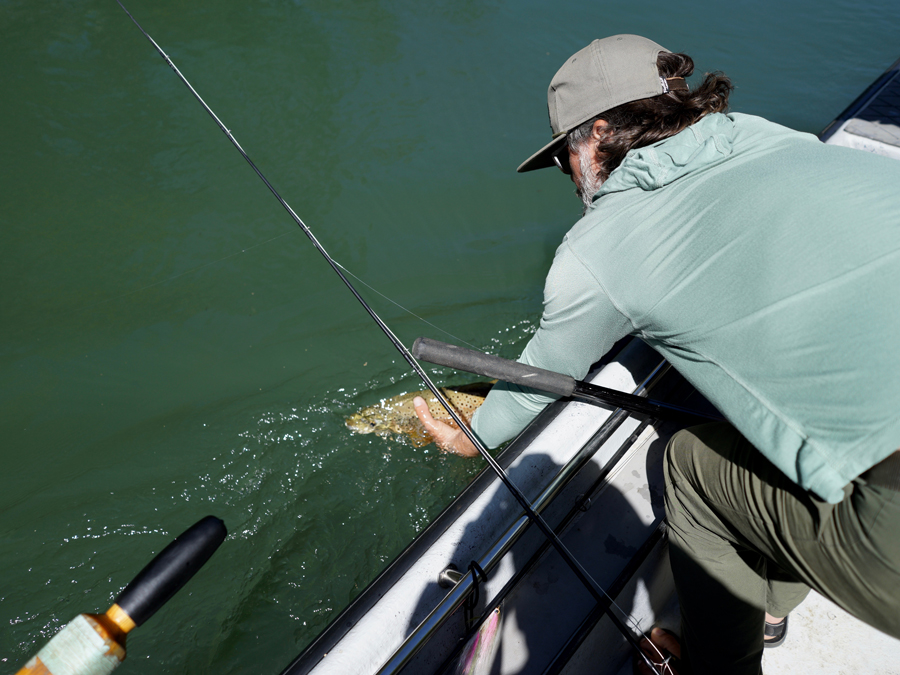 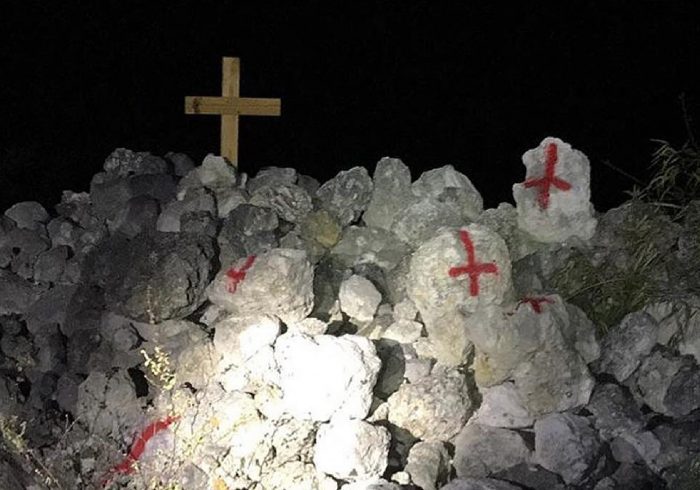