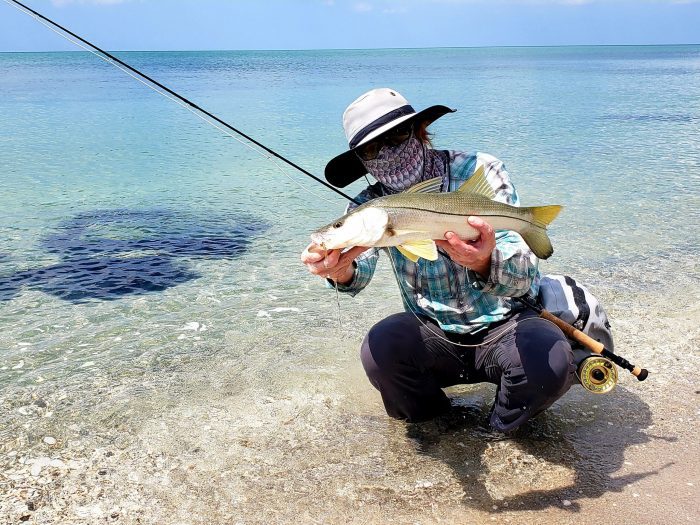 The Stream to Salt series is designed to help anglers of all abilities identify and overcome specific challenges arising from subconsciously applying “trout brain” to saltwater fly fishing. The goal is not simply to provide a list of new habits to memorize, but also to foster a deeper understanding of why some of the habits and assumptions developed while trout fishing can be detrimental in the salt, and how to adjust.

One of the greatest challenges trout anglers face when fishing salt water is adapting to the vastly different pace of action throughout the day. We’ve already covered the importance of showing up ready to catch fish, but how you react to not catching fish is even more important.

Anglers who primarily fish for trout are often tempted to adopt a more “technical” approach when they aren’t getting strikes–changing flies, lengthening leaders, reducing tippet size, etc.–but that’s only effective if there are actually fish around to see your flies in the first place. Many rivers have thousands of trout per mile, virtually ensuring that a fish will see your fly on almost every cast, but saltwater environments are so much less-densely populated that there may not be a single game fish within a mile of your fly, rendering the pattern’s color or size totally irrelevant. So rather than digging in when skunked, you’re far better off doing the opposite and changing locations instead, covering as much water as possible.

But reeling up and moving on can feel like giving up, since moving is typically a last resort when trout fishing. These old habits are likely to keep many trout anglers rooted in place while fishing the salt, trying an endless variety of flies and techniques in the same spot. Sometimes they get lucky, but covering water is going to be a more productive approach 99% of the time.

Covering water, by the way, doesn’t just mean walking a hundred yards and casting again; it means getting into your kayak/boat/car and heading to an entirely new spot, watching for any signs of life along the way, such as birds, stingrays, or schools of bait. The more water you can see in a day, the greater your chances of encountering a fish that wants to eat whatever fly you’ve got tied on, so invest your time wisely out there.

Evan Jones is the assistant editor of the Orvis Fly Fishing blog. He spent a decade living on the Florida coast and now makes his home on the Front Range of Colorado.

Loading...
Newer Post
MidwayUSA Foundation Teams Up with Reed’s Family Outdoor Outfitters and Federal Ammunition to Bring Day of Clays- Minnesota in August
Older Post
This Wave Is Beyond Superlatives, It Simply Must Be Seen

There are only a handful of legendary bass destinations in the country. True, there are hundreds of places to go fishing, but only some of them have [...]
conservation

There's nothing worse than needing to tighten, remove, or replace an important screw in the field without having the proper tool — it's a recipe for i [...]
Copyright 2022 Everest.com. All rights reserved