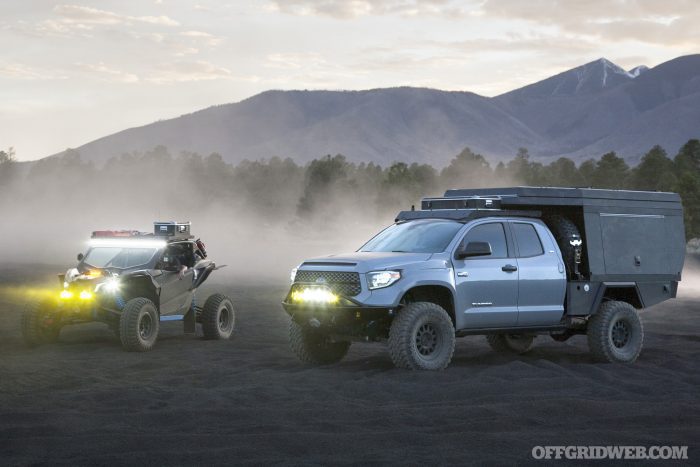 Traditionally, the term “toy-hauler” refers to a fifth-wheel trailer with a loading ramp and enough interior space for motorcycles, ATVs, or UTVs. I

Traditionally, the term “toy-hauler” refers to a fifth-wheel trailer with a loading ramp and enough interior space for motorcycles, ATVs, or UTVs. It’s a convenient way to travel to the lake, sand dunes, or mountains — when you arrive at your destination, the family piles out of the truck, the toys are backed out of the portable garage, and the trailer is converted into sleeping arrangements. It’s a tried-and-true formula … but what if there were a better way? Walt Wagner, founder of Tactical Application Vehicles, believes he has found one. He and his team at the TAV workshop in Albuquerque created this 2018 Toyota Tundra overland build into his concept of the ultimate toy-hauler/adventure vehicle. It blends the go-anywhere versatility of an overland camper, the practicality of a tow rig, and the high-speed performance of an off-road race truck.

The project began with a stock Cement gray Tundra 4×4 Double Cab. Much like TAV’s first project truck, the 2009 “Ranger Goat” Tacoma we wrote about in Issue 6 of Carnivore magazine, this Tundra is equipped with a full long-travel suspension setup. This enables the truck to fly down washboard fire roads and soak up bumps, even when it’s loaded down with passengers, cargo, and fuel. The suspension consists of a Total Chaos Fabrication long-travel kit with secondary shock hoops, King coilovers and bypass shocks, Alcan leaf springs, and King air bumpstops. For optimal ride quality and smoothness, TAV special-ordered custom shock valving and spring rates for the Tundra.

Since this truck is used for towing, Walt added a Magnuson supercharger to the 5.7L V-8 and installed higher-ratio 5.29 Nitro Gear ring and pinion sets in both differentials. This provides improved torque and low-end acceleration, helping to get the 17-inch Method Race Wheels and 37-inch Toyo mud tires up to highway speeds faster. Front and rear ARB air lockers allow the Tundra to crawl up steep inclines when it’s not on tow duty. A 46-gallon fuel tank from LRA makes gas station stops a rarity.

The Tundra’s most notable feature is its FiftyTen Full-Size Camping System, which replaces the entire bed with an assemblage of angular sheet metal. This German company has been manufacturing overland campers since 2017, but only recently entered the North American market; the TAV Tundra was one of the first vehicles in the U.S. equipped with this setup.

Above: Doors on all three sides of the FiftyTen camper offer easy access to gear within. If more space is needed, the camper shell can be removed entirely, leaving a versatile flatbed.

Its lower flatbed portion includes locking storage compartments and a slide-out rear drawer; the upper camper portion opens on three sides and pops up to reveal a spacious rooftop tent. Between the camper and cab, there’s a slot for a full-size spare tire. Walt also liked that the camper shell is removable, so the Tundra overland build can be used in flatbed configuration as a work truck. But with a base price of $38,400, this system requires deep pockets.

Above: MultiCam Black vinyl on the camper and hood contrasts nicely with the Tundra’s Cement gray paint.

Image Craft printed a custom MultiCam Black vinyl wrap for the FiftyTen camper, which was installed by Revive Wraps. The Tundra’s hood was also wrapped in matching material. Other exterior mods include wide fiberglass fenders from McNeil Racing, a Prinsu roof rack with Zarges aluminum storage case, a C4 Fabrication front bumper, and an array of Baja Designs LED lights.

As if this truck build wasn’t impressive enough on its own, Walt paired it with a customized 2019 Can-Am Maverick X3. This 172-horsepower UTV was quick in stock form, but Walt added a Stage 1 tune, clutch weights, and a drive belt from EVP to make it even quicker.

Above: With a spare tire carrier, fire extinguishers, jerry cans of fuel, two winches, and much more, this UTV is prepared for almost any emergency — day or night.

The TMW front bumper is outfitted with more Baja Designs LED ights and a winch, while the Geiser Performance rear bumper holds a full-size spare tire. The X3 also has a Geiser Performance custom cage with windshield, SDR Motorsports doors wrapped in MultiCam Black, and a Front Runner roof rack that TAV modified to fit the UTV.

Above: The cockpit is equipped with a powerful Rockford Fosgate sound system, a VHF/UHF radio with intercom headsets, and an sPOD controller for the auxiliary lights.

Inside, Walt and his copilot — usually his daughter — can settle into the TMW Triple X bucket seats, crank up the Rockford Fosgate Stage 4 stereo, and communicate at speed via intercom headsets hooked up to the Rugged Radios VHF/UHF system. Recovery equipment and other emergency gear is stashed in the TMW rear storage bag and Zarges hard case.

Above: The Tundra and Can-Am make a perfect pair, with one vehicle for high-speed trail fun and one to serve as an off-grid basecamp.

This combination of truck and UTV gives Walt the best of both worlds — a platform for comfortable long-distance travel with the whole family, and the thrills of a high-speed trail vehicle. He drives the Tundra overland build on a daily basis, using it to haul parts for the shop. On the weekends, he can lower the camper onto the bed, strap the Can-Am to the trailer, and escape civilization at a moment’s notice.

Just a little over 30 years after Roald Amundsen stepped foot on the southern tip of our planet, Antarctica was still ramping up as a hotbed of e [...] 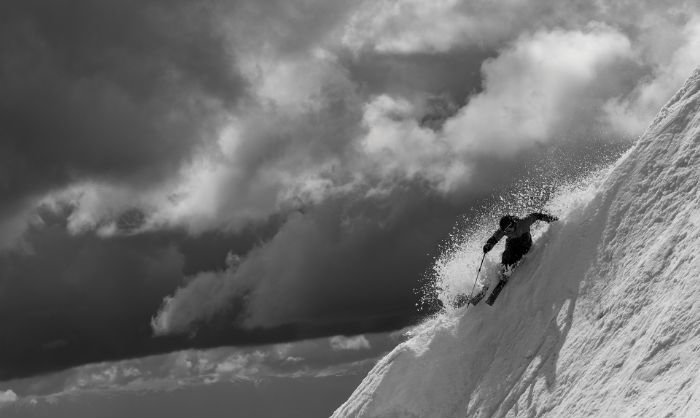 Featured Image: Frank Shine For over a decade, Blizzard’s Bonafide has been tearing it up inbounds, a bona fide charger—sorry, we [...]
Copyright 2022 Everest.com. All rights reserved