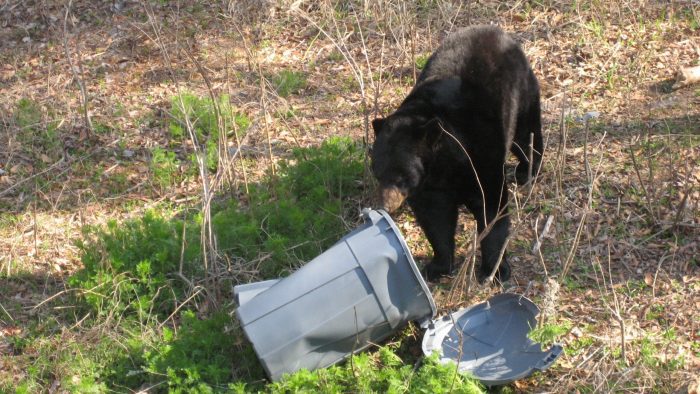 An 81-year-old woman turned her dogs out in her yard at 7 p.m. on Jan. 3, not knowing that the garbage outsider her home in Sussex Coun

An 81-year-old woman turned her dogs out in her yard at 7 p.m. on Jan. 3, not knowing that the garbage outsider her home in Sussex County, New Jersey, had been scavenged by a pair of black bears, reports NBC-NY. She was mauled when she tried to stop one of the bears from attacking her English Springer spaniel.

The unidentified woman told local police that she had put out her garbage that morning for its scheduled pickup the following evening. Later, when she let her two dogs outside to urinate, they spotted the bears.

“Two black bears were sitting there in the yard, eating the garbage,” Sparta Township Police Lt. John Lamon told NJ.com. “They had already gotten into the garbage, and they had it all spread out on the ground and they were helping themselves.”

An older English springer spaniel and a younger Vizsla pointer rushed the bears, chasing one bruin into nearby woods.

“The other bear stood its ground,” Lamon said. “The bear swatted and hit the [older Springer spaniel]. The younger [Vizsla] was so fast that the bears weren’t able to touch that dog.”

The woman was mauled when she “stepped in to try to save her dog,” Lamon said. “She ran toward the bear, yelling and attempted to get her dog away from the bear.”

Yelling is an appropriate tactic to try and scare black bears, but it didn’t work in this case. The bear bit and clawed the woman’s head and legs, according to Lamon. He said the bear picked up the spaniel and carried it into the woods “with her other dog in pursuit.” Patrol officers later found the Springer spaniel “mortally wounded” and brought the pet to a local veterinarian, where it died. The Vizsla was uninjured.

The elderly woman received seven stitches in her leg and was given antibiotics at the local hospital. Lamon said the woman didn’t want to speak to the media because she was too upset. Officials from the New Jersey Department of Environmental Protection and Division of Fish and Wildlife, were at the scene “to possibly trap the bear.”

Bear hunting was reintroduced in New Jersey in 2003 to help control the growing bear population after a nearly three-decade hiatus. Most recently, New Jersey governor Phil Murphy re-instituted a ban on hunting bears in 2018 on state lands, and refused to approve an emergency bear hunt request from the state game agency this past September.

My first big arctic char ever fell for a Pheasant Tail Nymph under a small Stimulator.Photo by Eiður Kristjánsson This week, I am lucky enough t [...]
Overlanding

The Cost of Gear is Too Dang High

Jimmy McMillan went camping last week and told me the cost of gear is too dang high. If some of you were born before this century, you’d know who th [...]
Copyright 2022 Everest.com. All rights reserved